HEIDI HEPLER, singer,lyricist and actress grew up in the midwest outside of Detroit in Livonia, Michigan. At the age of nine she began singing in her church choir and studying cello. Always involved in school plays and vocal groups, Heidi would eventually meet and begin advanced vocal training with New York lyric coloratura soprano - Marjorie Gordon, who, lucky for Heidi, had moved to Detroit when her husband, the great violist Nathan Gordon became first violist with the Detroit Symphony Orchestra. Heidi spent time in Los Angeles where she worked with the renowned vocal coach Seth Riggs. Theater and voice studies were continued with the University of Michigan Opera Theater at Interlochen National Arts & Music School.

Heidi's musical theater credits include Marietta in “Naughty Marietta”, Lauretta in “The Music Master', Fiona in “Brigadoon”, Belinda in “Dido & Aeneas', Julie Jordan in “Carousel”, Luisa in “The Fantastiks”. Heidi's unique vocal color and range has been described as a cross of Cleo Laine, Sarah Brightman and Yma Sumac.

From 1990-1994 while living and performing in Rome, Italy Heidi was heard by the producer of large jazz festival as she sang in a Rome Jazz Club. He immediately booked her as a featured performer at the '15th Festival Jazz di Roma' and was subsequently hired to oversee all production and artist contracts for this month long festival which took place in the Roman Olympic Stadium. Her dual language ability and background as a performer was a big plus as the artists she oversaw included, Archie Schepp, Ornette Coleman, The Manhattan Transfer, Dizzy Gillespie, Miles Davis, Pat Methany, James Moody, John Faddis.

In 1994 Heidi and Italian guitarist and violinist Michele Ramo began working together and were married the same year.

Since moving to New York in 1999, Heidi and Michele have been heard together at the Duplex Cabaret Theater, Iridium Jazz Club, Weill Recital Hall at Carnegie Hall, The National Arts Club for the Dutch Treat Club, The Triad, Birdland Jazz Club as well as performing a double bill with the great guitarist/composer Jorge Morel in the Virgin Islands for Art D'Lugoff, owner and impresario of the world renowned 'Village Gate' Jazz Club. Show less

Heidi Hepler Vocalist
”Hepler uses her unique voice as an instrument - from sounding like velvet to that of a violin, a melodious panflute and the coloratura of Mozart's 'Queen of the Night'.” 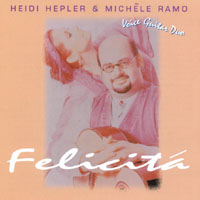 All About Jazz musician pages are maintained by musicians, publicists and trusted members like you. Interested? Tell us why you would like to improve the Heidi Hepler musician page.