Heleen van den Hombergh has received many great reviews as a singer and composer. Her professional singing career began when piano miracle Bert van den Brink heard Heleen's voice in 2000 and spoke of “love on first hearing” . With him, bass player Tony Overwater and percussionist Joshua Samson she recorded 2 CDs and a DVD and performed at the North Sea Jazz festival, Concertgebouw, BIMhuis, and many other fine stages in the Netherlands and abroad. Her first album Heard in the Scene mainly consisted of jazz & soul repertoire. For her second album and theatre performances, under the title “ Rush in the Woods! “ her long-standing passion for tropical forests inspired the lyrics and compositions, written by herself. It has taken a while and many ups and downs in her personal life before stepping into the recording studio again for a new album, released in 2011. The title Way Back Home reveals the search that has led to this musical tribute to life, despite all loss and longing. Heleen started with musical theatre at the age of sixteen, singing jazz standards and creating her first songs and stage performances. In the 1980s and 1990s she performed in bands and theatre-settings but did not yet choose for a professional career. Instead, intrigued by the rainforests, she studied tropical forestry and developed a career in science and international cooperation. In 2001 she entered the professional scene which immediate led to a much applauded performance at North Sea Jazz Festival in 2002.

“Authentic passion and artistry, a true story to tell and the talent to make it beautiful” (Judith Schlesinger All Music Guide, Jazz Institute Chicago, USA)

“Authentic passion and artistry, a true story to tell and the talent to make it beautiful” (Judith Schlesinger All Music Guide, Jazz Institute Chicago, USA)

“Van den Hombergh and her united band members take each other to higher levels of performance…Van den Hombergh has an expressive voice (…) her singing is always emotional and the lyrics are universal. (Ruud Heiijer Heaven Pop Magazine, NL) 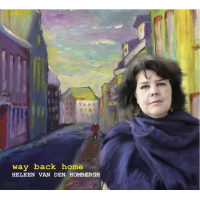 All About Jazz musician pages are maintained by musicians, publicists and trusted members like you. Interested? Tell us why you would like to improve the Heleen van den Hombergh musician page.