Pianist - Composer - Leader of bigger bands and smaller combos, Henrik Blichmann, Copenhagen, Denmark, was one of the pioneers of Danish jazz. He created his first swing band at the age of only 20. Soon his band got very popular and was live broadcast on national radio on a regular basis from e.g. the dance hall of the National Scala.

After Duke Ellington's first two concerts in Copenhagen on April 13, 1939, which Blichmann attended according to the jazz gossip press, Duke Ellington went to listen to the Henrik Blichmann Swing Band playing at the night club of Riddersalen. 24 years old Blichmann also played a solo, the Ellington composition of Swampy River, after which Ellington wrote on the sheet: To Blichmann, I wish I could play it as well now. Duke Ellington.

Henrik Blichmann also got involved in years of cabaret with late Lulu Ziegler, for whom he wrote the music of a number of memorable songs. Especially three of Henrik Blichmann's many wonderful compositions have been officially categorized as evergreens in Scandinavia, one of which, Ved kajen, was also recorded by Eartha Kitt in Swedish in 1957 (Vid kajen).

Another of those, Den sidste turist i Europa (The Last Tourist In Europe), was sung in a German translation in its full length by German Brecht interpreter Sonja Kehler, as the finale of the Lars von Trier movie of The Element of Crime.
Henrik Blichmann also wrote the title song for Danish movie Fireogtyve Timer (Twenty Four Hours), in the movie sung by Lulu Ziegler, accompanied by Henrik Blichmann himself and his ensemble, including guitarist Jorn Grauengaard. That song plus the third To mennesker (Two human beings) were recorded in 2000 by the Simon Spang-Hanssen Quartet on the CD of Long Shadows.

Henrik Blichmann wrote the music for the French - Danish movie co-production of 92 minutter af i gaar = 92 minutes d'hier (92 Minutes of Yesterday) in which movie not a word was spoken. The soundtrack was issued on vinyl, including a beautiful piano solo of the Theme waltz played by Blichmann himself, with his typical and renowned fine light touch, which people came from afar to hear.

More bio info to come! Above just some fragments from Henrik Blichmann's long career in music. 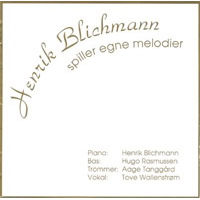 All About Jazz musician pages are maintained by musicians, publicists and trusted members like you. Interested? Tell us why you would like to improve the Henrik Blichmann musician page.