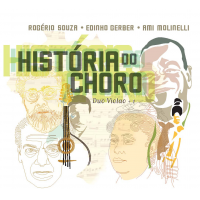 On A History of Choro, their first recorded collaboration, guitarist Rogério Souza, guitarist Edinho Gerber, and percussionist Ami Molinelli survey the musical history and evolution of choro, revealing its rhythmic and harmonic permutations and, in the process, create an album that is coherent in timbre and vision while marvelously varied in its nuances. The album’s 12 tracks present choro’s history in three blocks: the first representing the foundational block of the late 19th century through the first decade of the 20th century; the second representing the intermediate range of the music from 1910 through 1940; and the third representing the modern range from the 1940s through to the present day. Selections by composers such as Henrique Alves de Mesquita, Joaquim Callado (by all accounts the verified creator of both the choro style and name), Pixinguinha, Heitor Villa-Lobos, and Jacob do Bandolim, are here performed alongside original compositions by Souza and Molinelli. This project is funded mostly by the San Francisco Arts Commission Individual Artist Grant for Ami Molinelli in collaboration with Rogério Souza and Edinho Gerber of Duo Violão.

All About Jazz musician pages are maintained by musicians, publicists and trusted members like you. Interested? Tell us why you would like to improve the History of Choro musician page.