Home » Musicians » Discography » In the Bush 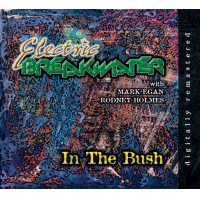 This is a digitally remastered reissue (with two bonus tracks) of an album originally released in 1999. Two world renowned musicians - Mark Egan and Rodney Holmes took part in this recording project. Electric Breakwater brings to you the best of both worlds with an appealing fusion of contemporary, modern, streamlined jazz sounds. This is the kind of music that has a cross cultural appeal. It transcends any age group or jazz traditionalist attitude. Keyboardist Andrzej Winnicki's electric jazz compositions blend the excitement of jazz with the soulful energy of rhythm&blues, funk and other influential genres.It is in true essence a blend of every type of jazz. Drummer Rodney Holmes, known to jazz fans for his recordings and performances, among others, with Carlos Santana, Wayne Shorter, Joe Zawinul, the Brecker Brothers, Special Effects, Steps Ahead, Rodney also performed with Electric Breakwater in Polish Consulate in New York and in many jazz clubs in NYC area. Another world renowned musician who took part in the recording of this CD is the bass player Mark Egan, known for his unique fretless bass sound and style, his association with Pat Metheny, the Gill Evans Orchestra, David Sanborn, the group Elements and with other outstanding representatives of the world of jazz. Their musical roots in Poland, which boasts a prolific jazz community, band's founders - keyboardist Andre Winnicki and saxophonist Krzysztof Medyna toured Europe extencively during the early 1980's with the original Breakwater. The group was featured at European jazz festivals, won international jazz competitions and was broadcast on national television and radio. Later, Medyna also performed as a member of the group In/Formation with ECM recording artist Tomasz Stanko. In the US Breakwater was revived in a Polish-American format with Holden Nagelberg on bass and Dave Anthony on drums (who both also participated in recording of this CD).

Help improve the In the Bush page

All About Jazz musician pages are maintained by musicians, publicists and trusted members like you. Interested? Tell us why you would like to improve the In the Bush musician page.