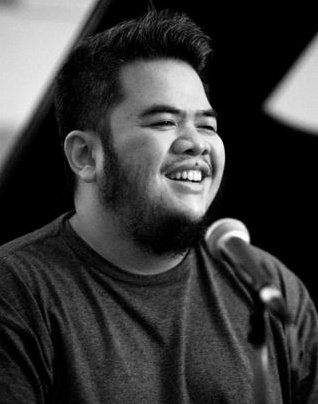 Indra Aziz is a vocalist, saxophonist, and composer from Jakarta, Indonesia. His first music experience as a child was from his mother, who was a singer, actress, painter, writer, and traditional west Javanese dancer, Rosita Sanusi.

As a composer, Indra wrote many original music both vocal and instrumental. Indra also wrote a couple of big band arrangements, some are recorded and some written for live performances only with Opustr3 team, for artists like Shelomita (Payung Fantasi, Jazz Masa Kini), Dian Pisesha (Tak Ingin Sendiri, Kerinduan), and Ruth Sahanaya in her 2006 Christmas album “Joyful Christmas”.

In March 2006, indra released his first single Jakarta City Blues, an acapella arrangement using only Indra’s voice, layered, and improvised, about the big manggo, Jakarta. The single then got nominated for AMI awards 2006, the Indonesian grammy, for “best production in jazz.” In November 2008, Indra was granted with “Jazz Rising Star” award from the Jazz Goes To Campuss Awards Comitee. You can find more of his works on his YouTube channel http://www.youtube.com/user/slashchords or simply go to the “performances” page on this website.

Indra Aziz is currently working as a vocal professor in Institut Musik Indonesia (IMI, www.imimusik.com) where he is also in the campus’s board of advisors. He also teaches at the Universitas Pelita Harapan Conservatory Of Music, as contemporary vocal coordinator, and the director of the international South Jakarta Community Choir. Show less

All About Jazz musician pages are maintained by musicians, publicists and trusted members like you. Interested? Tell us why you would like to improve the Indra Aziz musician page.