Ineke Vandoorn & Marc van Vugt With fairy-like sounds, funky arrangements, modern music full of harrowing and twisting harmonies and sadly comforting songs, singer/pianist Ineke Vandoorn and her partner in music composer/guitarist Marc van Vugt explore boundaries in an admirable and fascinating way: between improvisation and composition, in original songs with regular lyrics and in pure improvisations, by giving their characteristic interpretation of standards or by amalgation of different musical expressions.

In the intimacy of a duo, trio or quartet, and with surprising and original crossovers with a chamber choir or a full orchestra, Like the Dutch Metropole Orchestra or the Dutch Chamber choir. Jazz as a conception is reinvented time after time; Fantasy, technical skill and willpower as a guarantee for a primal emotional impact: Music that will reverberate in your head for a long time. 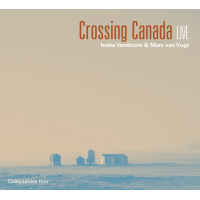 All About Jazz musician pages are maintained by musicians, publicists and trusted members like you. Interested? Tell us why you would like to improve the Ineke Vandoorn & Marc van Vugt musician page.