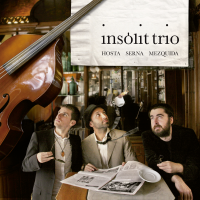 The trio arises from the friendship between two highly creative musicians who have been playing together for a long time: the pianist Marco Mezquida and the drummer Martí Hosta. Miguel Serna has joined them, forming a peculiar trio which gives birth to striking pieces with their unusual instruments. Departing from the basic jazz instrumentation: piano, double-bass and drums, the sonorous range is extended with keyboards and synths, bombo legüero and last but not least, diverse kitchenware… all set to allow fluid complicity amongst the players. Insolit’s music is expansive, sincere, unambiguous; the work of musicians who are passionated about improvisation and opened to music without any style constraint. They have recorded his first and self-titled album, “Insòlit trio” (2012), featuring eight self-composed songs expressing all the magic and virtuosity of their live performance. Pure freshness.

All About Jazz musician pages are maintained by musicians, publicists and trusted members like you. Interested? Tell us why you would like to improve the Insolit trio musician page.