Interoceaico means inter-oceanic. Interoceaico 3 is a unique blend of three musicians from Japan and Argentina.The group was formed in Boston, MA 2002 by a composer and guitarist, Hiroya Tsukamoto from Kyoto, Japan. They have performed many concerts throughout the Boston and New York area including several appearances at The Berklee Performance Center(Boston, MA), Ryles Jazz Club(Cambridge, MA) and Satalla (New York, NY). They had successful tours to Japan( November 2004) and Korea/Japan (August 2005).

They are a musical ensemble different than most of their contemporaries. Interoceanico's music is a cornucopia of lush harmonies, lyrical melodies, driving rhythms and the first class arrangements that form their original music. They combine elements of South American folklore, contemporary fusion, jazz and pop music to create an overall sound that is appealing to both non-musicians and musicians. The architecture of their music is shaped by the variety of diverse influences and backgrounds.

Hiroya Tsukamoto is a one of a kind composer and guitarist. He began his musical career playing the five-string banjo when he was thirteen, and took up the guitar shortly after. Influenced by many songwriters like Paul Simon, Joni Mitchell, Niel Young and James Taylor, he started to compose songs in the genre while attending high school in his native Kyoto, Japan.

In 1994, Hiroya entered The Osaka University of Foreign Studies and majored in Comparative Cultural Studies of South America. He developed a deep interest in jazz and formed a fusion band called Playa Azul. His group performed live on Japanese radio and in various jazz festivals throughout the Osaka area. While at college in Japan, Hiroya was introduced to a musical and social movement in South America called Nueva Cancion headed by musical legends such as Victor Jara and Violeta Parra.

Inspired by the movement, he joined a Traditional South American music group called Voces del Sur and performed all over Japan. At the same time, he studied with Hiroshi Tsuchino and Mike Stern to hone his skills as a fusion guitarist.

In 2000, Hiroya received a scholarship to Berklee College of Music and came to the United States. Since then, he has studied with Wayne Krantz, Mick Goodrick, Hal Crook and Adam Rogers. He is also the recipient of the Professional Music Achievement Award(2003). Hiroya is a recording artist of the Boston-based record label Jazz Revelation Records.

Hiroya's band, Interoceanico is a unique blend of eight very special musicians from different countries and continents. They have performed many concerts throughout the Boston and New York area, which included several appearances at the Berklee Performance Center (Boston, MA), Ryles Jazz Club (Cambridge, MA) and Satalla (New York). Their music is an amalgamation of traditional rhythmic elements from various South American countries with western harmonies and Japanese lyricism of melodies, resulting in a unique and original sound. It is best described as “Folkloric music with contemporary harmony in a jazz format.

Hiroya completed a full-length album entitiled The Other Side of the World with his band interoceanico and released in March 2004. The album was introduced by Peter Barakan on Japanese National Radio (NHK-FM) in March 2004. Hiroya had a tour to Japan with his group interoceanico in November 2004. His composition entitled “El Otro Lado del Munco (The Other Side of the World)” was nominated as the finalists of latin category of The USA Songwriting Competition 2004. He had toured to Korea and Japan in August 2005 with new group Oceanico+ and Andrew Kim Group.

Motohito Fukushima was born in Kobe, Japan in 1978. His mother was piano teacher and grandmother was master of “Syamisen”, Japanese traditional string instrument. Naturally this environment made him play various instruments. At age sixteen He started electric bass and played in clubs and music festivals in Kobe,Osaka and Kyoto.

After high school, Motohito attended Koyo Concervatoire (Berklee International Network School). At the same time he began his professional career with famous Japanese players. He also led his own group and played in Kansai Area regularly.

He is preparing for Interoceanico's 2nd album, the recording project with Ko and Florian in Germany, recording with David Potaux-Razel. Also his own project (solo and duo) is going on.

Franco Pinna started his musical career in 1988 in his native Tucuman, Argentina where he performed and recorded with some of the best folklore musicians of that country such as Raul Carnota, Lucho Hoyos, Cesar Isella, Leopoldo Deza, and Popi Quintero.

Pinna is a founder member of New York-based group “Los Changos” that performs original music based on Argentinean rhythms. The drummer has dedicated a big part of his life to study all the different rhythms from the South American folklore creating a unique way of interpret them incorporating some traditional percussion instruments in to the drum set and developing his own style based on the folkloric percussion techniques.

As a sideman, Franco has recorded more than 30 CDs, some of them released by prestigious labels such as “Fresh Sound”, “Chesky Records”, “BigSur Records”and “Putumayo”. Show less

Interoceanico 3 band/orchestra
”Interoceanico's music is earthy, organic and an amalgam of elements imported from diverse genres” -The Groove(USA)

”They are fresh, subtle and instantly likable and rotating cast keeps the soundscape from becoming repetitive” -Jazz Review.com(USA) 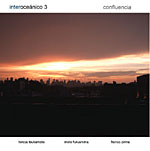 All About Jazz musician pages are maintained by musicians, publicists and trusted members like you. Interested? Tell us why you would like to improve the Interoceanico 3 musician page.