Composer, Pianist Ioannis Goudelis has performed internationally at festivals, clubs and concert halls throughout the world including the United States, Europe, Africa, Central America and the Pacific. Born and raised in Greece, Ioannis started playing piano and accordion at the age of 9 in his hometown, the beautiful island of Corfu. He has performed, recorded, open up concerts or toured with artists such as Stevie Wonder, Dierks Bentley, Ray Price, Mike Stern, Stanley Jordan, Pantelis Thalassinos, Alexia Vassiliou and many more. His original music has appeared on Fox (House), NBC (NCIS) and HBO shows. In 2011, he scored the feature film “The Church Office” directed by Nancy Bellany. He has also composed original music for CBS Radio shows, short films and the FIAT commercial for California among others. In September 2012 he performed on Jimmy Kimmel “Live” with Miss Willie Brown. Ioannis has two personal albums, “Life Goes On” released in 2007 and his recent 2013 release “Melodia”. 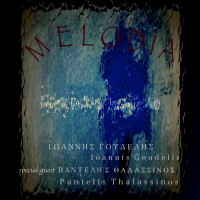 All About Jazz musician pages are maintained by musicians, publicists and trusted members like you. Interested? Tell us why you would like to improve the Ioannis Goudelis musician page.