Israel “Cachao” Lopez (born 1918 in Havana, Cuba), often known just as “Cachao” (pronounced kah- CHOW) is a Cuban mambo musician and composer, who has helped bring mambo music to popularity in the United States of America in the early 1950s. He has a star on the Hollywood Walk of Fame, and has been described as “the inventor of the mambo”. He is considered a master of descarga (Latin jam sessions).

Lopez played the acoustic bass with his late brother, multi- instrumentalist Orestes Lopez. The brothers composed literally thousands of songs together and were heavily influential on Cuban music from the 1930s to the 1950s. They introduced the ritmo nuevo (”new rhythm”) in the late 1930s, which transformed the danzón by introducing African rhythms into Cuban music, which led to mambo.

Lopez has won several Grammy Awards for both his own work and his contributions on albums by Latin music stars, including Gloria Estefan. In 1995, he won a Grammy for Master Sessions Volume 1. In 2003, he won a Latin Grammy for Best Traditional Tropical Latin Album together with Bebo and Patato Valdes for El Arte Del Sabor.

His nephew, Orlando “Cachaito” Lopez became one of the mainstays of the famed Buena Vista Social Club group.

Cachao has played with artists such as Tito Puente, and his music has been featured on movies such as The Birdcage, and on the Grand Theft Auto: Vice City soundtrack. Actor Andy Garcia produced a documentary entitled Cachao... Como Su Ritmo No Hay Dos (”With A Rhythm Like No Other”) in 1993 about his music.

Cuban American actor Andy Garcia, who made a 1993 documentary about the bassist's career, credited Cachao with being a major influence in Cuban musical history and said his passing marked the end of an era.

“Cachao is our musical father. He is revered by all who have come in contact with him and his music,” Garcia said in a statement Saturday. “Maestro . . . you have been my teacher, and you took me in like a son. So I will continue to rejoice with your music and carry our traditions wherever I go, in your honor.”

Cachao (ka-CHAH-o) and his late brother, multi- instrumentalist Orestes “Macho” Lopez, are known for the creation in the late 1930s of the mambo, which emerged from their improvisational work in Cuba with the danzon, an elegant musical style that lends itself to slow dancing.

“We would take turns at the piano and try things out,” Cachao said in a 1995 interview with the Miami Herald. “And that's how things came up. We realized then that this rhythm was not common. And it was faster than it is today. . . . But it was too fast for dancing, and we were six months without any work. People didn't like it. When we slowed it down, then it became danceable.”

The mambo, with its sped-up syncopation, was popularized by bandleader Damaso Perez Prado, and Cuban composers and jazz musicians have tweaked it over the years. It also influenced the development of salsa music, a New York hybrid with Cuban roots.

In the 1950s, Cachao and his friends began popularizing the descarga (”discharge” in Spanish), a raucous jam session incorporating elements of jazz and Afro-Cuban musical approaches.

Cachao left communist Cuba in 1962, relocating first to Spain, and soon afterward went to New York, where he was hired to perform at the Palladium nightclub with the leading Latin bands.

In the United States, he collaborated with Latin music stars, including Tito Puente, TitoRodriguez, Machito, Chico O'Farrill, Eddie Palmieri and Gloria Estefan. He lived in Las Vegas in the 1970s, performing at casino shows, but eventually had to leave. “If you live in Las Vegas and gamble, you spend most of your time at the pawnshop,” he told the Miami Herald in 1995. “I have to thank my wife Esther; if not for her, we would not have anything. But I had to quit and I did, cold turkey.”

He fell into obscurity during the 1980s after moving to Miami, where he ended up playing in small clubs and for weddings. But his career enjoyed a revival in the 1990s with the help of Garcia's documentary “Cachao . . . Como Su Ritmo No Hay Dos” (Like His Rhythm There Is No Other) and the release of several CDs, including the Grammy-winning album “Ahora Si!” in 2004.

Cachao was born in Havana in 1918, the youngest of three children whose parents played and taught the bass. The family of musicians at one point had 35 bassists in its circle. “Our house was a wreck, with instruments everywhere,” Cachao told the New York Times in 1991. “There were people playing all the time.”

Classically trained, he began working professionally at age 8, playing with the house orchestra of a movie theater, providing background music for silent films. He stood on a wooden crate to reach the upper neck of the stand-up bass.

Cachao began performing with the Havana Philharmonic Orchestra as a teenager, working under the baton of visiting guest conductors including Herbert von Karajan, Igor Stravinsky and Heitor Villa-Lobos during his nearly 30-year career with the symphony. He also wrote hundreds of songs in Cuba for bands and orchestras, many based on the classic Cuban music style known as son.

He continued to perform into his 80s. He appeared at the Hollywood Bowl in 2006, and in 2000 he performed a new composition called “Mambo Mass” at St. Vincent de Paul Catholic Church in Los Angeles.

“I'm a musician. That's what I do,” Cachao told the Miami Herald. “I never had delusions of grandeur. I never expected to be famous or anything like that. I just played, and whatever happened happened.” Show less 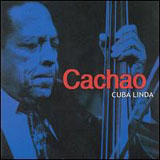 All About Jazz musician pages are maintained by musicians, publicists and trusted members like you. Interested? Tell us why you would like to improve the Israel "Cachao" Lopez musician page.