Originally from the City of Angels, the Manhattan resident originally migrated eastward to continue his development as a creative musician on the East Coast scene. Now a force to be reckoned with on the international jazz scene, Mr. Williams has appeared regularly at such notable venues as “Birdland”, “Village Vanguard”, and “Lenox Lounge”. Mr. Williams has also given solo piano improvisation concerts at the Knitting Factory and performed world premieres of his original compositions at Smalls Jazz Club.

Mr. Williams has toured the countries of Malta, Switzerland, France, Sardegna, and Italy with Greg Osby. Mr. Williams has been a member of drummer Charli Persips' “Supersound” for several years and has appeared with Mr. Persip in a piano trio as well as at various festivals such as the New Jersey Jazz Fest and Duke Ellington Jazz Festival. Additionally, Williams has also performed with Joseph Jarman as part of AACM's concert season and as part of Jarman's group at the Vision Festival.

As distinctive a composer as he is a player, Mr. Williams's compositions and arrangements are pensively lyrical- all bear his signature of refreshingly innovative harmonies and well-crafted melodies. In a recent review of James Gordon Williams's highly acclaimed CD “Unrepeatable Life”, “Jazz Improv Magazine's” Winthrop Bedford has stated, “James Gordon Williams is nothing less than an accomplished, impressively creative pianist and composer, with great depth and substance.” “All About Jazz” writer Rusty Aceves stated, “Williams? writing is marked by intensely lyrical and evocative melodic elements which are sometimes staggered with pointed chordal syncopations, adding depth, dimension, and a feeling of seeming serenity against constant motion.” 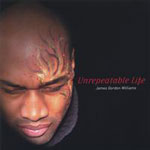 All About Jazz musician pages are maintained by musicians, publicists and trusted members like you. Interested? Tell us why you would like to improve the Lonnie Gasperini musician page.