London-based jazz vocalist James Hudson has all of the unique qualities that epitomise the 21st century crooner. An assured and charming performer, James has a natural affinity with an audience. Fuelled by his desire to play a part in keeping jazz standards alive, James’s obvious passion for these songs shines through in his delivery of intimate ballads and up-tempo swingers alike.

James’s debut album 'TOMORROW', released in February 2021, was be the biggest milestone of his career so far and provides the perfect showcase for his extensive vocal range, tasteful phrasing and interpretive ability. Over a year in the making, this recording features James and his band performing their brand-new arrangements of classics from The Great American Songbook. ​ In-demand at many of London’s most respected jazz clubs, James has recently performed to sold-out crowds at the world-famous Ronnie Scott’s Jazz Club and Pizza Express Jazz Club Soho. He has appeared at the EFG London Jazz Festival, Leeds Jazz Festival, Wigan International Jazz Festival and the Snape Proms. Regularly guesting with some of the top big bands and orchestras in the industry, James sings with The Dover Street Big Band, the award-winning Tom Sharp Jazz Orchestra and has featured as a soloist with the London Musical Theatre Orchestra.

As ‘Artist in Residence’ at many of London’s most exclusive live music venues, James has honed his craft by performing in front of live audiences on a regular basis with his own jazz ensembles. James has travelled all over the world to sing - appearing in Spain, India, Norway, Egypt, Switzerland, Malta, France, Sweden, Greece and held a two week residency at the distinguished Hotel De Paris in Monte Carlo.

Following in the footsteps of many of the UK’s finest jazz musicians, James is an alumni of the National Youth Jazz Orchestra (NYJO) whom he toured with as lead vocalist for three years. NYJO gave him an early opportunity to sing in packed out concert halls and at world renowned jazz festivals, whilst also getting the chance to meet and work with the best emerging jazz talent in the UK. Originally from East Yorkshire, James studied at The University of Warwick where he was awarded the ‘Vocal Music Scholarship’ and got his first taste of singing with a big band. James initially began his career in Leeds before moving to London to continue pursuing his developing career and begin work on his debut album. 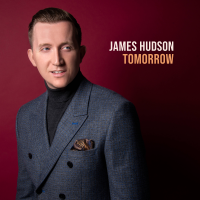 All About Jazz musician pages are maintained by musicians, publicists and trusted members like you. Interested? Tell us why you would like to improve the James Hudson musician page.