Jawanza Kobie would simply like to be known as a composer in the truest sense of the word. Ever since he was young boy he idolized the music of Beethoven, George Gershwin, Aaron Copeland and began learning to notate his compositions at nine years of age. Born and raised in West Philadelphia, he started taking piano lessons in his neighborhood at age six after his mother discovered that he could replicate on his own what his older brother had been taught in his piano lessons right after his brother had finished practicing.

As a teenager, he continued his education in music at the famed Settlement Music School in Philadelphia where he was first introduced to structure and the rules of composition. At this time the musical influences that he heard on the radio and records of the day were impossible to ignore. Jazz music had always been a dominant force in his development ever since his father first introduced him to it at a very young age. However, funk, soul, pop, rock, and even folk made a major and indelible impact on this musical young man. His early influences began with Oscar Peterson, Ramsey Lewis, and Bobby Timmons in jazz piano and later he discovered Chick Corea, Herbie Hancock, the great Art Tatum and others. The Beatles, Bob Dylan, James Brown, Motown, Atlantic, and Stax recording artist, Sly and the Family Stone as well as Elmer Bernstein, Quincy Jones and other film composers were and still are an inspiration. His current influences have grown to include Hip-Hop beats. He has written music for the “Freedom Theatre” (in Philadelphia) plays and musicals and toured briefly with their productions.

Jawanza would later enroll and earn a Bachelors degree in music majoring in composition at the well known Berklee College of Music in Boston Mass. There he would front a jazz/funk thirty-piece big band playing his original compositions that bore his name. This band would perform concerts and play in theatre productions in the Boston area. Members of the big band went on to greater heights in the music industry. Some on their own, others as educators, playing with jazz legends like Art Blakely and the Jazz Messengers, Dizzy Gillespie, Tito Puente, and others.

After Berklee, Jawanza taught music in the public schools, as well as did session and copyist work for artist on Warner Brothers, and Philadelphia International records. He also played and tour with singer Billy Paul. It was around this time jazz drummer and vocalist Grady Tate took an interest in his talent and became a mentor to him and would come to his recording sessions while in New York City. Later, Jawanza was signed to Alpha International Records as a songwriter and producer where he would work with some of the top writers and producers in the area like Nick Martinelli.

Always wanting to score for film and television, he ultimately got the opportunity to hone his skills on many independent projects in Philadelphia, Chicago, and Los Angeles. He has had music aired in various venues on PBS, as well as television and radio stations in Philadelphia and Chicago.

As the familiar cliché has been used to describe many, Jawanza feels that writing and creating music is like breathing. Not being able to write and create music, for Jawanza would be like not breathing. Show less 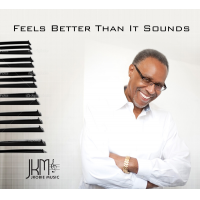 Feels Better Than It...

All About Jazz musician pages are maintained by musicians, publicists and trusted members like you. Interested? Tell us why you would like to improve the Jawanza Kobie musician page.