Prolific. Prodigal. Profound. That is Jay Rodriguez. Sometimes the sound is explosive, wild and full of fury, other times his music aches with a passion that’s painful and bare. Always modest and reverent, Rodriguez harnesses the unbridled audacity of youth and melds it with the uncanny discipline of a hardened New York jazz veteran. Married to the song while sleeping with the groove, his sound sings of commitment to an ideal—it is spontaneity, culturally untethered and unpretentious, the excitement of far flung love at all costs. It is perfectionism kissed by chaos. – Michael Gelfand/THE NEW YORKER

He could be breathy and insinuating on a ballad, brawny and extroverted in an uptempo… – Jon Pareles, THE NEW YORK TIMES​

Mr. Rodriguez plays with an unreserved flexibly on the tenor, alto and soprano saxophones; flute; and bass clarinet. Originally from Colombia, he has worked with artists from Prince to Elvis Costello to Marc Ribot. On his own forthcoming album, “Your Sound (Live at Dizzy’s Club Cola-Cola),” Mr. Rodriguez moves between idioms and energies as easily as he switches instruments... – Giovanni Russonello, THE NEW YORK TIMES

Mr. Rodriguez is more than a musician. He is a visionary. Jay Rodriguez is the Latin American Answer to James Carter and a true light to hear and see.– Arnie Lawrence, Founder of THE NEW SCHOOL for Jazz and Contemporary Music

Havana International Jazz Festival Reedman / Saxophonist Jay Rodriguez, down from New Y0rk for the festival says, ‘I have admiration for the people and the culture and the way they persevere and are educated, in general culturally and musically. They are supportive of their own musicians, and the young musicians are skilled and well trained.’ – JAZZTIMES

“His work is defined with versatility, humor and heart. His jazz playing is full of blues and soul. It is one of those voices that are hard to describe with words, and that is much closer to the spirit.” – EL HERALDO, Colombia 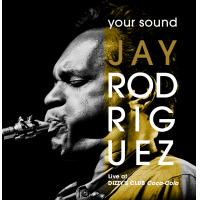 All About Jazz musician pages are maintained by musicians, publicists and trusted members like you. Interested? Tell us why you would like to improve the Jay Rodriguez musician page.