Johannes Strasser was born in Grieskirchen, Upper-Austria in 1959 and now resides in Vienna. He studied classical doublebass in Salzburg and Vienna. In 2005 he was awarded the prestigious Hans Koller Prize for Sideman of the Year. A versatile, subtle and swinging accompanist and brilliant improviser, throughout his career Strasser has always been in extremely high demand in Jazz circles within all formats from Duo to Big Band and in the wide world of contemporary music as well as in various other musical contexts. In 2007 he commanded the bass chair for the Vienna Art Orchestra’s 30th anniversary world tour and recorded All that Strauss Vol II with the VAO. Currently he is also participating in various exiting projects with mathias rüegg and the great multitalented young singer Lia Pale and also recorded with those groups. He had been the permanent bassist of the late Fritz Pauer in his Trio from 1990 until 2011 and played in numerous projects of Fritz Pauer: for example in his Quintett, in projects with the great Apollon String Quartett from Prague and the Trio, as well as serving as an exquisit rhythm section for Jazzgreats like Benny Golson, Art Farmer, Sheila Jordan, Don Menza, Johnny Griffin, Pee Wee Ellis and of Hans’ long time friend and partner, the late austrian vocalist Cornelia Giese (CDs Rainsong and Lembranca PG records) With Fritz he recorded for example the CDs Moods from wonderland (Jive), Quiet Passion(Universal) and can be heard on about 7 more recordings with the Trio. In 2009 he co-produced the successful double CD The Essence of Silence (Jive records) together with Chico Freeman and Fritz Pauer and toured with that group. During his career Hans also played on ocassions and in Clubs with international Jazz greats such as: Harold Mabern, Eric Alexander, Bobby Shew, Lew Tabakin, Gene Harris, Chet Baker, Karl Ratzer, David Murray, John Colliani, Jesse Davis and others. In recent years, he could be heard both as player and composer with the Aaron Wonesch Trio, in a project with the internationally acclaimed turkish pianist/composer Burak Bedikyan and Austrian Saxofonist Martin Fuss.

Wolfgang Wehner was born on May 16, 1963 in Vienna. At 13, he had his first engagement as drummer at an evening ballroom dance with a special police permit, as he was still underage.

From 1982-1987, Wolfgang studied jazz drums at the Conservatory of Vienna with Fred Mühlhofer. At 20, he toured the USA for the first time. As a member of the Swingtime Big Band, he received the Best Sound of Glenn Miller Worldwide award on their US- tour in 1998 (Atlanta). With the act Jazz Gitti & Her Disco Killers, he received 3 x gold, 2 x platinum, 1 x double platinum from 1987-1997, the World Music award in 1992 in Monte Carlo for the best selling artist in 1991 in Austria and toured through Asia and Australia.

His teaching credits (drums, percussion) include 7 years at the Franz Schubert Conservatory Vienna and 3 years at the Gymnasium Ödenburger Str., 1210 Vienna.

He is the founder of jazztrio.at (2013); Thomas Barth (p), Christoph Petschina (b), Johannes Strasser (b) have been permanent members since 2015. Wolfgang Wehner has also been very active in his charitable work for Tibet and Nepal. He founded the Austria-Tibetan Friendship society and served as technical director (light, sound, internet streaming) for the tour of HH 14th Dalai Lama in 2012. Show less

Jazz In The Spirit Of Summer: "Sommeralbum," New Release By jazztrio.at 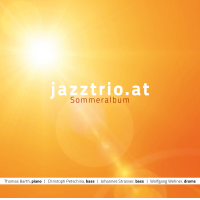 All About Jazz musician pages are maintained by musicians, publicists and trusted members like you. Interested? Tell us why you would like to improve the Jazztrio.at musician page.