JD is grateful for his childhood introduction to the world of music. A product of his familial church boychoir, JD went on to sing with the renowned “American Boychoir.” He attended the University of North Texas via a vocal jazz scholarship and became a featured soloist on university recordings. After receiving various awards from the International Association of Jazz Educators, he left the United States to live in Amsterdam, Holland to study with acclaimed recording artist Deborah Brown.

JD has currently recorded five CD's. “Sirens in the C-House” (Encounter/ Dreambox Media Records 2000) brought him much critical acclaim. His second CD, the innovative and experimental “Clear Day” (Doubletime Records2001), is a collaboration with master musician Dave Liebman. Others include: “Dedicated to You” with the Steve Rudolph trio (PACT Records 2004), “2Bass, a Face and a Little Skin” (Encounter/Dreambox Media Records 2006) and a self-released, “Live in Portugal” (JWal Records September, 2008). His first four recordings made it to the “Top 25 Jazz Releases” list of internationally syndicated jazz DJ Bob Parlocha. Moreover, his CD's have helped expand JD's listening audience from the shores of America to Europe, Russia and the Far East. JD has been a guest artist on many CD's, is also a member of pianist Orrin Evans Luvpk band, with two releases on Imani Records (2004, 2007), as well as performing three songs on trumpeter Sean Jones latest release”Kaleidoscope” on Mack Avenue Records.

JD has appeared on many international radio and television broadcast stations including NBC television; National Finland Radio; and Radio Extreme, Helsinki. He has appeared on live Russian television and radio broadcasts, CNN Latin America, as well as having served as guest host on various American radio stations. JD has been a featured artist at countless American jazz festivals and clubs, performed at numerous festivals in Europe, the Middle East, and Central America and toured Russia more than 25 times, performing in over 100 cities.

A vocal coach for many emerging artists, JD is in demand as a clinician at schools and universities. He has performed numerous clinics for the National Academy of Recording Arts and Sciences and the Music Educators National Conference, and has taught at the prestigious Sebelius Conservatory in Helsinki, Finland, Jazz Palau De Valencia in Spain, The University of North Texas (invited back as the first vocalist ever on their lecture series), The Moscow Music Consort and the Kazan Music Conservatory in Russia. JD is a regular on the music scene in New York having headlined at such venues as Lincoln Center, The Jazz Standard, The Jazz Gallery, Joe's Pub, The Tribeca Performing Arts Center, Sweet Rhythm, Smoke and can be seen frequently at the famed 55 Bar. He was also formerly on the faculty of the University of the Arts in Philadelphia, PA and currently resides in New York City, teaching at The Aaron Copeland School of Music and The New School, and performing regularly at many major jazz clubs and events. Show less 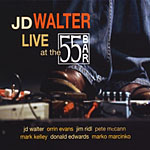 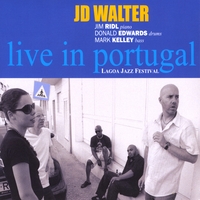 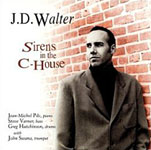 All About Jazz musician pages are maintained by musicians, publicists and trusted members like you. Interested? Tell us why you would like to improve the JD Walter musician page.