Jen Allen is a jazz pianist whose debut solo album “Pieces of Myself” was released in June 2011. The album features Dave Baron on bass, Lee Fish on drums, Kris Allen on alto, Josh Evans on trumpet and Andrew Renfroe on guitar.

In May 2011, Allen was chosen as one of only eight pianists from around the world to participate in the Mary Lou Williams Women in Jazz Workshop at the Kennedy Center in Washington, D.C.

Allen has played with many jazz greats including Nat Reeves, Jimmy Greene, Dezron Douglas, Charles Flores and Kris Allen. She has performed in venues throughout the world including the Winnipeg Jazz Festival, the Cambridge Festival of the Arts, the Greater Hartford Monday Night Jazz Series, and with many groups including Kendrick Oliver’s New Life Orchestra, the collaborative New Unity Quartet and other jazz and creative music ensembles.

A native of Foxboro, Massachusetts, Allen was originally a cellist who started playing jazz piano as a favor to her high school band director, and it was then that she found her true artistic voice. She received a Performing Arts scholarship to pursue her Bachelors in Music performance at the Jackie McLean Institute of Jazz at The Hartt School

. As a student, Allen was able to study under Jackie McLean, Steve Davis, and Andy LaVerne.

In May 2011, Allen was one of eight pianists selected to take part in the Mary Lou Williams Women in Jazz Workshop at the Kennedy Center.

Read more articles
”It's (Pieces of Myself) a smart, elegant showcase for her skills as a pianist and composer featuring seven expressive originals and one fine standard, which resonate with an emotional, memoir-like inspiration.” Hartford Courant

This summer Allen joined the Senior Faculty at the Litchfield Jazz Camp. Allen also teaches at The University of Hartford (music history), Trinity College, The Greater Hartford Academy of the Arts. She has taught private lessons for over 12 years. 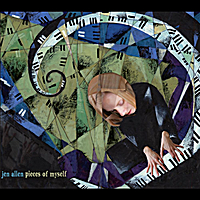 From: Tessellations
By Jen Allen

All About Jazz musician pages are maintained by musicians, publicists and trusted members like you. Interested? Tell us why you would like to improve the Jen Allen musician page.