Like most professional chameleons, his cv is necessarily diverse. But whether playing jazz-related or improvised music, performing composed music with small ensembles or large orchestras, playing and/or composing for film, animation, theater, music theater, and contemporary dance productions, or even playing mariachi in funny pants for a wedding gig: there's a joy and a challenge in all of it, looking for the sweet spot.

Apart from these what you might call “social endeavors”, he records and produces his own music under the monniker Orquesta del Tiempo Perdido (previously Roomtone or Megasubtiel).

And for what it's worth, he has studied jazz guitar at the Arnhem conservatory, and plays a little pedal steel and banjo as well. Show less 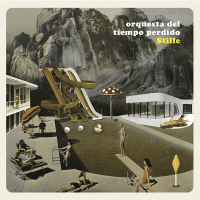 All About Jazz musician pages are maintained by musicians, publicists and trusted members like you. Interested? Tell us why you would like to improve the Jeroen Kimman musician page.