Though he had only three Top 10 hits in the first, purely rock & roll phase of his career, many critics believe Jerry Lee Lewis was as talented a '50s rocker as Sun labelmate Elvis Presley. Some also believe that Jerry lee Lewis could have made it just as big commercially if his piano-slamming musical style was not so relentlessly wild, his persona not so threateningly hard-edged.

Lewis' first musical influences were eclectic. His parents, who were poor, spun swing and Al Jolson records. But his earliest big influence was country star Jimmie Rodgers. In his early teens he absorbed both the softer country style of Gene Autry and the more rocking music of local black clubs, along with the gospel hymns of the local Assembly of God church.

Lewis first played his aunt’s piano at age eight and made his public debut in 1949 at age 14, sitting in with a local C&W band in a Ford dealership parking lot. When he was 15 Lewis went to a fundamentalist Bible school in Waxahachie, Texas, from which he was soon expelled. He has often said that rock & roll is the Devil’s music.

In 1956 Lewis headed for Memphis (financed by his father) to audition for Sam Phillips’ Sun Records. Phillips’ assistant, Jack Clement, was impressed with Lewis’ piano style but suggested he play more rock & roll, in a style similar to Elvis Presley’s. (Presley had recently switched from Sun to RCA.) Lewis’ debut single, “Crazy Arms” (previously a country hit for Ray Price), did well regionally, but it was the followup, 1957’s “Whole Lotta Shakin’ Going On” (#3), that finally broke through.

Lewis’ high school nickname was the “Killer,” and it stuck with him as he established a reputation as a tough, rowdy performer with a flamboyant piano style that used careening glissandos, pounding chords, and bench-toppling acrobatics.

His career ran dry for nearly a decade. He had a modest 1961 hit with “What’d I Say,” but in 1963 he left Sun for Smash/Mercury. He toured relentlessly, playing clubs, billing his act as “The Greatest Live Show on Earth.” On the way, he developed a drinking problem. ln 1968 he played Iago in a rock- musical version of Shakespeare’s Othello called “Catch My Soul”.

Eventually, Lewis and his producer, Jerry Kennedy, decided to abandon rock & roll for country music. In 1968 Lewis had the first of many Top 10 country hits with “Another Place, Another Time,” followed by “What Made Milwaukee Famous (Made a Loser Out of Me).”

In 1973 Lewis released The Session, a return-to-rock album recorded in London with a host of top British musicians, including Peter Frampton, Alvin Lee, Klaus Voormann, and Rory Gallagher, redoing oldies. It resulted in some pop chart success with “Drinkin’ Wine Spo Dee Odee,” an R&B song he’d performed at his public debut in 1949.

In 1978 Lewis signed with Elektra and enjoyed some FM radio play with “Rockin’ My Life Away.” He also continued to tour, performing all the styles of his career: rock, country, gospel, blues, spirituals, and more.

In 1981 Lewis played a German concert with fellow Sun alumni Johnny Cash and Carl Perkins. The show was released as an album called Survivors in 1982. He appeared on the 1982 Grammy Awards telecast with his cousin Mickey Gilley; another cousin is TV evangelist Jimmy Swaggart.

He last came to widespread public attention in 1989, when the biographical film Great Balls of Fire, starring Dennis Quaid as Lewis, was released. In 1995 he finally released a new album, Young Blood. He continues to tour, an in 1999 he performed in Baltimore, Maryland, at the Smithsonian Institution’s bash celebrating the 300th anniversary of the piano. 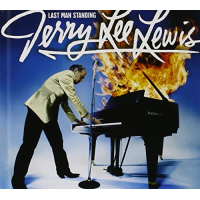 All About Jazz musician pages are maintained by musicians, publicists and trusted members like you. Interested? Tell us why you would like to improve the Jerry Lee Lewis musician page.