Jim Cavender spends more and more time recording, whenever he has time off from gigs. He just finished recording a literature/jazz project, “Alligator Wings” by Duke Way, which he started immediately after finishing “And So It Is” by Keith Taylor Trio and “Been Down Low” by Ivy Joe Milan. In 2012, he produced The Crawling Chaos by Rolling Jazz Revue. He released three non-jazz singles by pleasPlease, “Blues Schnitzel”, a cover of James Brown's “Get Up (I Feel Like Being A Sex Machine)” and a cover of “Timothy” written by Rupert Holmes in March of 2013.

In 2011, he finished one collaborative Americana CD, A Cellarfull Of Noise , with Skip Heller. He released a blues/r&b recording, The Snake Doctors (Deluxe Version), featuring the soulful singing and songwriting of Charlie Howell on 13 tracks originally released on CD in 1997, along with three, previously unreleased, live tracks recorded in 2008. He recorded and engineered four songs for an LP by Robert Daniel and Jana Savanapridi, as well as a Thunderfakers (Savanapridi along with Matt Bakula) song for a compilation, The Long Hundred, on Cosmodemonic Telegraph Records in Connecticut.

In 2010, Cavender produced To A Planet by Rolling Jazz Revue and one blues/rock live CD, Bookaroo. To A Planet features all original tunes

. Bookaroo is a live collaboration between Cavender, Ivy Joe Milan and the Snowballs, Criss Ashwell and other mainstays of the Huntsville, Alabama, music scene. Both the live concert and the CD were fundraising projects for Huntsville Public Library, where the CD is currently available.

Jim has eaten plenty of peanut butter and jelly sandwiches throughout the country with bands The Jungle, Then Again and The Snake Doctors. He didn't pass out while performing with Percy Sledge, Bo Diddley and Chocolate Armenteros, three people he admires. He has also performed in Cuba with pianist Roberto Carcasses and trumpeter Julio Padron, in Colombia and in Sweden with bassist Anders Eriksson and trumpeter Toti from Circus Maximus. Jim studied music at East Texas State University, and in his home state of Alabama he was lucky enough to get lessons with the late r&b session guitarists Tippy Armstrong and Eddie “Spanky” Alford.

Cavender has produced or co-produced albums in various genres since 1986 including The Jungle by The Jungle (jazz), It Creeps Up On You by Swine Cadillac (blues), Move To The City by Then Again (rock), Brothers by Ken and Harry Watters (jazz), The Snake Doctors by The Snake Doctors (rhythm and blues), Black Boots And A Suitcase by Joshua Black Wilkins (rockabilly) and Along The Anchorline by Skip Heller Trio (jazz). Currently Jim is working on an r&b/funk CD featuring Ivy Joe Milan on vocals and percussion, and he has a CD in the works with his jazz/funk/rock organ combo Trio El Camino.

In addition to playing instruments and/or singing backup vocals on the above-listed albums, Jim Cavender played upright bass and guitar on Don Bowyer's Itchin' In The Kitchen (big band jazz) and co-wrote “Fall Festival” with Ken Watters on Brothers III by Ken and Harry Watters (jazz). Jim also contributed original songs for some of the albums he has produced over the years.

“The Keith Taylor Trio’s O Christmas Tree-O (Startlingly Fresh Records) is a seasonal joy from start to finish: a delectable example of the sort of trio piano jazz I could listen to forever. Taylor is joined on piano by Jim Cavender (bass) and Tom Branch (drums), and tenor saxman Greg Chambers sits in for a few tracks.

“The lengthy tracks allow plenty of improv work.... Taylor demonstrates his inventive keyboard work with the album-opening ‘The Second First Noel,’ which also benefits from the first of Cavender’s many slick bass solos

“The Keith Taylor Trio’s O Christmas Tree-O (Startlingly Fresh Records) is a seasonal joy from start to finish: a delectable example of the sort of trio piano jazz I could listen to forever. Taylor is joined on piano by Jim Cavender (bass) and Tom Branch (drums), and tenor saxman Greg Chambers sits in for a few tracks.

“The lengthy tracks allow plenty of improv work.... Taylor demonstrates his inventive keyboard work with the album-opening ‘The Second First Noel,’ which also benefits from the first of Cavender’s many slick bass solos. Taylor and Cavender trade licks on several tracks; I’m particularly impressed by their work on the mid-tempo handling of ‘Once in Royal David’s City.’ ‘O Christmas Tree’ is an up-tempo finger-snapper, with a truly cookin’ bass solo from Cavender. An equally lively rendition of ‘We Three Kings’ proves that these heads of state really know how to groove on a track that boasts numerous tempo changes.

“But as much as I enjoy this trio’s faster selections, the slower pieces truly shine. ‘Silent Night’ and ‘I Wonder As I Wander’ are soft and mysterious: both lovely readings of these gentle carols. Chambers’ sax work highlights an unexpectedly slow and sentimental reading of ‘Frosty the Snowman,’ a song usually given a lively up-tempo reading that emerges here as a lament (Which I guess makes sense; Frosty did melt, after all!).

“The album closes with another quiet one: ‘Some Children See Him,’ introduced with Taylor’s gentle keyboard work, which guides this lovely standard — and the entire album — to a perfect conclusion. Great job, guys.” 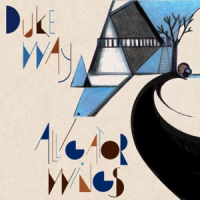 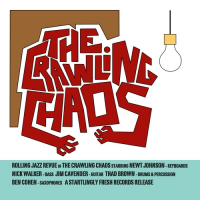 City Beneath The Sea (Alternate Version)

Jim Cavender
Elephants In The Crosswalk

All About Jazz musician pages are maintained by musicians, publicists and trusted members like you. Interested? Tell us why you would like to improve the Jim Cavender musician page.