I've been involved in the professional music business since 1970, but incredibly, still enjoy playing the drums anyway. I consider it very fortunate that my Indianapolis grade school had a full band program and indoor plumbing as well. At age 12 the “music nun” yanked me from piano lessons to play drums in the orchestra because no one else had exhibited any natural proclivity toward becoming the scapegoat in the school's traditional losses at district band contests. Falling in love with the drums immediately, I demonstrated my interest and gratitude by ripping off drumsticks from the school, using them at home to break the heads on a pair of Emenee bongos.

In order to protect the windowsills and tabletops, a drumset was soon provided and in no time, I was auditioning for my first band (”Do you know the beat to 'Wipe Out'?” “Yeah.” “OK, you're in.”). Starting with youth centers and community pools, moving up to after-game dances and drunken frat-house affairs, I paid my dues to reach the top in Naptown: VFW halls, Moose Lodges, mall openings, sets between films at drive-ins, and occasional Union jobs at the Women's Prison. I once found myself playing along with the jukebox at a country joint too cheap to hire a whole group; realizing something was missing, I decided to devote myself to bands inexplicably working on unique, original material no one wanted to hear.

By this point I was gaining notoriety as a drummer who would show up for the gig, but I needed more...so, after finally perceiving that further artistic growth could not occur in an area with such a dearth of seedy dives, I moved to Philadelphia

I founded ENCOUNTER RECORDS in 1986 and DREAMBOX MEDIA in 1995, resulting in Philadelphia Magazine’s choice award for 1999 Best of Philly® Jazz Record Label; Produced Evelyn Simms' “On My Own,” awarded BEST JAZZ RECORDING OF 1989 by the Philadelphia Music Foundation; currently working and recording with Tyrone Brown (former bassist for Max Roach), the Jim Ridl Trio, the Tom Lawton Quintet, “MONKadelphia” and the Denis DiBlasio Quartet / Quintet; two trips to Europe w/ pianist BRIAN TRAINOR; Adjunct Professor for Advanced Study of DrumSet on Jazz Faculty at Rowan University, Glassboro, N.J.; Active Member American Federation of Teachers, Local 2373; member JazzBridge.org advisory board; Awarded “Philadelphia Jazz Hero” for 2013 by the Jazz Journalists Association.
DREAMBOX MEDIA is an independent musicians' co-op dedicated to promoting the rich tradition of distinctively original and creative Philadelphia jazz artists performing a wide range of jazz styles.
Since Philadelphia Jazz has a rich tradition of breeding distinctively original and creative artists, Dreambox Media aims to supplement and provide an alternative to the mass market-driven policy decisions made by other record labels.
Releasing works by under-recorded veterans and deserving newcomers, Dreambox Media enables these recordings to reach a wider audience through its own website, NorthCountry Distributors, amazon.com, and other outlets. Dreambox artists have played major jazz festivals and clubs all over the world, and have conducted local community workshops for students of all ages in the spirit of spreading the message of America's uniquely indigenous artform, a truly democratic music.

I build my own drumsets, and use DREAM cymbals, Pro-Mark sticks, various mallets and brushes.

The Dreambox Concerts: An Ongoing Series In Honor Of Social-Justice...

”...the element of surprise” in a set that is “musically inspiring, uncompromising, observant and technically impressive...” (jazzreview.com)
”With his characteristic flexibility, one that makes it sometime seem as if he's physically steering the band around the turns of whatever tune is rolling past” (-Cadence)
...”the orchestrational drummer of choice” (-Jazz Player magazine)
”...unbelievably difficult to listen to...” (-AllAbout Jazz.com) 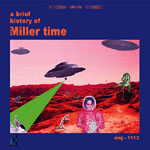 A Brief History of... 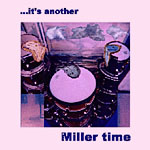 Jim Miller
...It's Another Miller Time

Jim Miller
If It's Not One Thing...

All About Jazz musician pages are maintained by musicians, publicists and trusted members like you. Interested? Tell us why you would like to improve the Jim Miller musician page.