James E. “Jimmy” Wormworth III, born August 14, 1937 in Utica, New York, is a seasoned, veteran jazz drummer who trumpeter John Marshall (WDR Big Band) calls “a living part of jazz history.” At age 20 he toured Europe with his own quartet, then went to New York City on the invitation of arranger Torrie Zito and soon began touring the United States with Nellie Lutcher.

In 1969, Jimmy Wormworth was invited by Barry Harris to perform with Coleman Hawkins at The Fillmore East for Mr. Hawkins' second-to-last performance before his death. He has also performed with Roy Eldridge, Ernestine Anderson and Helen Humes. He worked regularly with Al Haig from 1969 until 1982 as well as with J. R. Monterose, Charles Davis, Lonnie Hillyer, Charles McPherson, Barry Harris and Dizzy Reece. In addition, he performed with baritone-saxophone legend Cecil Payne in 2003.

Jimmy Wormworth is also a recipient of “The Barry” award, given to him in 2005 by Barry Harris “For True Jazz Mastery.”

These days, as one of the generation of great bebop drummers in New York City, Jimmy keeps a busy working schedule. Recently he toured Germany and Switzerland with both Charles Davis and John Marshall and has also toured Europe with Annie Ross, Warren Vaché and Tardo Hammer. In 2011 and 2012, he taught jazz drumming workshops and master classes in Berlin (Drumtrainer) and Vienna (Konservatorium Wien)

”Jimmy Wormworth evinces a quality that is in short supply among contemporary drummers, and that is restraint.” Jack Bowers's review of Float Like a Butterfly on allaboutjazz.com

“...drummer Jimmy Wormworth sizzles with an aggressiveness that brings to mind the late Art Taylor.” John Vincent Barron's review of Land of Dreams

“Jimmy Wormworth is a powerful drummer, whose boundless energy is not easily contained in any room, and who exemplifies the same kind of ageless musicality as [Charles] Davis.” Luke Kaven's liner notes for Land of Dreams 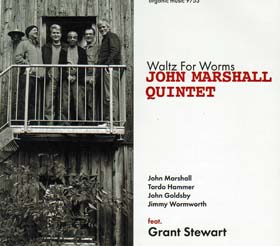 All About Jazz musician pages are maintained by musicians, publicists and trusted members like you. Interested? Tell us why you would like to improve the Jimmy Wormworth musician page.