Jimmy Wyble is one of the few guitarists who made a mark in both country & western and jazz, his discography naturally crashing through a few supposedly fenced-in genre boundaries to get him from Benny Goodman to Bob Wills. The latter artist's so-called radical style of Western swing was no surprise to Wyble, since he was playing his own style of Western swing music in 1942 with guitarist Cameron Hill when Wills got a chance to hear the guitarists playing live.

Up until this time, Wyble was a staff musician on a Houston radio station, but he had been steadily toiling at bringing a jazz element into country music, sometimes against great pressure. He was one of a group of musicians tormented by bandleader Foreman Phillips, who ironically was the dude who actually coined the term “Western swing” to begin with.

He might have liked a swing rhythm, but Phillips detested jazz improvisation and was said to have placed a sign reading “Where's the melody?” at Wyble's feet. Wills promptly hired both Wyble and Hill as “twin guitars” for his Texas Playboys. The bandleader had a fondness for combining hot players on identical instruments into musically dynamic duos and in the case of Wyble, the results can be heard to great advantage on the classic Wills' tribute to a fatso, “Roly Poly.” Wyble kept up his picking with Western swing bands well into the '50s, interrupted by a stint in the Army from 1942 through 1946.

His first album as a leader was released in 1953, entitled simply The Jimmy Wyble Quintet. The instrumentation was much more complicated than the title, reflecting the ingenuity of Wyble as well as the leader whose spell he had been under. He combined accordion, clarinet, guitar, bass, and drums to create a lineup more similar to a klezmer band or a New York “downtown” group of the '90s than a Western swing or jazz combo. Also in 1953, he recorded with the quartet of jazz guitarist Barney Kessel.

Wyble began touring with the groups of both Goodman and the skilled vibraphonist Red Norvo. The latter artist was particularly adept and sympathetic with the guitar and this association produced two highly praised albums of mainstream jazz, as well as an Australian tour backing Frank Sinatra.

As for Goodman, he had a natural interest in Wyble stretching back to the early Western swing days; although the clarinetist was snobbish about anything to do with country music, he apparently almost swallowed his glasses the first time he heard a recording of Wyble, Hill, and pedal steel virtuoso Noel Boggs playing a solo by Goodman's most famous guitarist, the great Charlie Christian, in unison.

After a lull in recording activity, Wyble cut another unusual set in 1977 with the strangely titled Jimmy Wyble & Love Brothers; nobody named “Love” appeared on this record, so the album's title must have been some kind of spiritual statement.

The guitarist mainly kept busy in this period in the Los Angeles studios and was a member of Tony Rizzi's Five Guitars. He appeared on television programs such as the Flip Wilson Show and Kraft Music Hall and studied classical guitar with fellow recording studio honcho Laurindo Almeida. He also taught, with students who were guitar stars in their own right, including Howard Roberts and Steve Lukather.

Wyble's film credits include The Wild Bunch, in which his strumming provides a nice background to a shot of ants devouring a scorpion, the original “Rat Pack” Ocean's Eleven, and the melodrama Kings Go Fourth. In the '80s he relocated to San Francisco, where he teaches guitar and writes guitar instruction books. 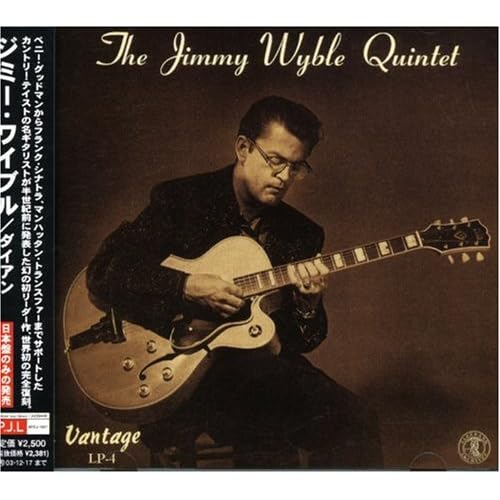 All About Jazz musician pages are maintained by musicians, publicists and trusted members like you. Interested? Tell us why you would like to improve the Jimmy Wyble musician page.