Born João Gilberto do Prado Pereira de Oliveira on June 10, 1931, in the town of Juázeiro in the northeastern state of Bahia, Brazil. His father was a wealthy merchant who insisted that all of his seven children receive an education. Gilberto defied his father's wishes however, devoting himself to music after receiving a guitar from his godfather at the age of 14.

By the age of 18, Gilberto had moved to Salvador, the capital of Bahia, where he sought to earn a living as a radio performer. While never finding major success as a solo artist on radio, he gained the attention of a member of the vocal group Garotos da Lua (Boys from the Moon), who performed regularly on Radio Tupi in Rio de Janeiro, and he was invited to join the group. Gilberto moved to Rio to replace the group's vocalist, Jonas Silva, whose subdued style displeased the group's artistic director. Ironically, Gilberto would later popularize a whisper-like vocal method highly reminiscent of Silva. Gilberto lasted only one year with Garotos da Lua. After showing up late or altogether missing several performances, the group fired him.

In 1955, Luis Telles, the leader of the traditional singing group Quitandinha Serenaders, with whom Gilberto had performed for a time, convinced Gilberto to move to Porto Alegre. From there, Gilberto moved to Diamantina, where he lived with his older sister, and her husband. There, Gilberto played music constantly, often practicing in the bathroom where the acoustics were best. It was in this environment that Gilberto developed his signature singing style, a quiet sound absent of vibrato that allowed him to most accurately set the tempo of his vocals to the rhythm of his guitar. In finessing his style, a variation on the traditional Brazilian samba, Gilberto incorporated the influences of several musical genres, both from Brazil and America.

Gilberto returned to Rio in 1956, where he renewed his acquaintance with musician and composer Antonio Carlos Jobim. In 1958, Gilberto recorded Jobim's composition “Chega de Saudade.” Although Gilberto's intense demands in the studio significantly prolonged the recording session, the song was released on the Odeon label as a single along with “Bim-Bom” on July 10 of that year. While the record was not an immediate hit, it eventually gained widespread popularity and established bossa nova, which in English means “new wave,” as an exciting new musical form. Gilberto released three albums in the bossa nova style over the next three years in his home country: “Chega de Saudade,” “O Amor, o Sorriso e a Flor,” (Love, Smile, and the Flower); and “João Gilberto,” all on Odeon. He exhibited the same exacting standards for his live performances as for his studio recordings, refusing to play in clubs where audiences talked while he was on stage.

American jazz guitarist Charlie Byrd discovered the music of Gilberto, Jobim and other bossa nova artists during a goodwill jazz tour of Latin America sponsored by the U.S. State Department. Byrd introduced the musical form to American jazz saxophonist Stan Getz, and the two recorded a top-selling bossa nova album together, “Jazz Samba.” The album spent 70 weeks on the American pop charts and hit number one. Gilberto moved to the United States in 1962, and in 1964, he and Getz recorded “Getz/Gilberto,” which featured the Jobim-penned bossa nova classic, “The Girl from Ipanema,” sung by Gilberto's then-wife Astrud Gilberto. Both the album and the song earned Grammy Awards that year. Gilberto remained in the U.S. until 1980, with the exception of a two-year stay in Mexico. During his time in the U.S. and Mexico, he released only a handful of LPs, including the live album “Getz/Gilberto II,” (1966) “Joao Gilberto en México,” (1970) “João Gilberto,” (1973) “The Best of Two Worlds,” (1976) and “Amoroso.” (1977).

Gilberto continues to perform, but only on occasion. He appeared at the JVC Jazz Festival at New York's Carnegie Hall in 1998 to celebrate the 40th anniversary of the first bossa nova single, and embarked on a U.S. tour in 2003.He remains an enigmatic figure, but his introduction, and contribution to Brazilian influenced jazz, cannot be denied. Show less

Joao Gilberto Is Gone At 88 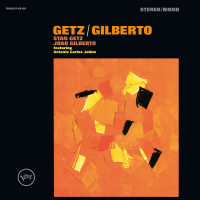 All About Jazz musician pages are maintained by musicians, publicists and trusted members like you. Interested? Tell us why you would like to improve the Joao Gilberto musician page.