Every now and again a singer comes along who so personally delivers a song that we are ourselves moved to feel more deeply--to appreciate life more fully, in all its joy and pain; and to see things as she sees them, as facets of the wonderful gift that is life. Jody Sandhaus is such a singer. John Williams, writing in HOT HOUSE NY Jazz Nightlife Guide, says, “Jody sings so gently and carefully about love that we are encouraged to imagine and define with clarity our arrival to love and our continuance in that dream.”

Of course, the artist must have the craft to bring the art to life, and Jody began to develop her formidable skills as a child. Born in Houston to a musical family and moving to New York early on, she was exposed to the wonders of classical music and studied the piano with Dolores Soyer Gold. While taking her degree in Liberal Arts at Case Western Reserve University in Cleveland, Jody continued her pursuit of music at the Cleveland Institute of Music, where she studied piano and voice. As a singer, Jody had enjoyed singing the popular music of her youth, but it was while living in St. Maarten, in the West Indies, that she found a neglected record collection. It was then that she was introduced to the work of Ella Fitzgerald, Peggy Lee, Maxine Sullivan, Hoagy Carmichael, Frank Sinatra and others--sounds that would shape her musical future.

Upon her return to New York, Jody began in earnest to study vocal production, working intensively with noted vocal coach Marie Traficante. Since the 1980s, Jody has been a fixture on the musical scene in New York and its environs, being heard there and around the world in such venues as New York Steinway Hall, The Charles Ives Performing Arts Center, Zinno Jazz Club, The Villa Celimontana Jazz Festival in Rome, etc.. Her first solo album, “Winter Moon”, on Saranac Records, gave us the first opportunity to hear a collection of songs recorded as Jody came to feel them--personally, and without artifice. Reviewing “Winter Moon” in JazzTimes, Chuck Berg said that, “Jody Sandhaus is an evocative vocalist whose sultry after-hours delivery meshes perfectly with such exquisitely excruciating torch tales as 'Not in Love.' On medium paced gambols she flirts with breezy aplomb.”

Berg also remarked that, “clearly, Sandhaus is a singer who's also a musician. She phrases like a horn and swings with uptown élan.” The mother of three, Sandhaus is married to pianist Pete Malinverni, who, along with bassist Rufus Reid and drummer Leroy Williams, joins her on “Winter Moon.” Malinverni, legendary bassist Michael Moore and Leroy Williams ply their significant talents in support of Jody on, “I Think of You” released in the Summer of 2001.

Listen to Jody Sandhaus, live or on CD, and you'll see why you'll be transported to a place where life is a trip worth taking. 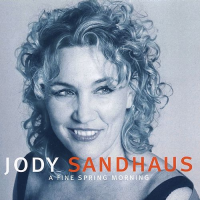 
I Think of You

All About Jazz musician pages are maintained by musicians, publicists and trusted members like you. Interested? Tell us why you would like to improve the Jody Sandhaus musician page.