Fass is known among peers as much as a tunesmith as improvisor and considers himself a 'presenter of songs'. He is a strong believer in and supporter of composition and composers.

Recent Quotes: “I really like Joel's 'Not a Bad November'. It's a very classy tune. I told him to send it to Tony Bennett”. Bill Finegan (arranger for Glenn Miller, co-leader Sauter-Finegan band, recent recipient of ASCAP lifetime achievement award)

“Joel Fass has been one of the solid, steady guitarists on the NY scene for more than two decades. His warm tone and melodic improvising are well worth hearing for any serious jazz fan” Randy Johnston (jazz guitarist, recording artist currently in the Lou Donaldson Quartet) Show less 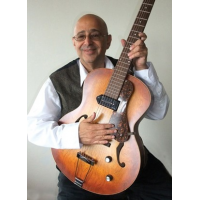 All About Jazz musician pages are maintained by musicians, publicists and trusted members like you. Interested? Tell us why you would like to improve the Joel Fass musician page.