Joseph Robichaux was born in New Orleans in 1900, and lived there for most of his life, with spasms of jazz action in Chicago and New York, or touring in Cuba, Europe and Japan. He played piano with Oscar Celestin, in the Black Eagle Band, and also accompanied the excellent Jones/Collins Astoria Hot 8, one of the first bands (1929) to be recorded at home in New Orleans.

As a pianist he was a modernizer with a full grasp of New Orleans tradition, and his band played what could be called 'New New Orleans music'. On his Document release, The Rhythm Boys supplied tight, sharp, driving ensemble work, with fierce riffs being interspersed with hard, blazing solos. No trombone, no bass, contrary to New Orleans custom. The rhythm section of piano, guitar and drums creates an astonishing urgency and precision, pounding on like an inspired machine. This is early jazz at its best.

Robichaux disbanded his band in 1939 and went on became a solo pianist, in New Orleans. He performed on many R&B recording sessions in the early '50s, was the pianist for George Lewis' Orchestra from1957 to 1964, and was a regular at the famed Preservation Hall. 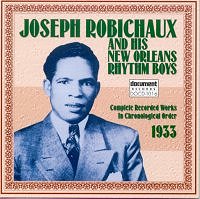 All About Jazz musician pages are maintained by musicians, publicists and trusted members like you. Interested? Tell us why you would like to improve the Joe Robichaux musician page.