John Finbury is an American composer based in Andover, MA.

His earliest music education and influence came from his father Herb, a musician (violin) and one of the first jazz composition students at the Schillinger School in Boston, which would later become Berklee College Of Music. In his teenage years, John played rock & roll drums, most notably at the “The Bitter End” in New York City. In college, John studied classical piano and music theory and composition at the Longy School of Music in Cambridge and Boston University.

Seeking another connection to music, John ran a legendary movie house and concert hall in Salem, MA, hosting performances by BB King, Bonnie Raitt, Richard Thompson, REM, Eric Burton and The Animals, and Pat Metheny, among many others. In a parallel life, John has been a practicing attorney for 35 years, though you’ll never hear him refer to his law practice as a “day job”, but rather his other “profession.”

John married his lifelong muse Patty Brayden, who sings and is a frequent collaborator as lyricist; they have often performed locally as part of the Jazz Sextet “Day For Night”. John’s old friend Ned Claflin (who has also worked with Madonna and Martin Sexton) is another important associate in the lyrics department.

In what he recognizes as his first professional commission as a composer, in 1979 John wrote and recorded a soundtrack for “Portraits from the 2 O’Clock Lounge”, a TV documentary by Fred Simon produced for WGBH Boston. The R&B and pop songs he wrote and recorded in the early 80s have garnered current critical attention, with many being acquired in 2014 by Fervor Records. This renewed interest in his music sparked a new era in John’s composing focused on his longstanding interest in the beautiful music of Brazil.

In October 2014 John released an EP of four original songs of Brazilian Jazz called “The Green Flash”. All four songs were nominated for The American Songwriting Awards in 2015, with “SambaDan” winning the award for Best Instrumental.

In 2016, Finbury shocked the Latin Music scene when a cut from “Imaginário” called “A Chama Verde,” was nominated for a Latin Grammy for “Song Of The Year.”

In 2017, John released his second MPB album “Pitanga” with the same lineup, which received critical acclaim. 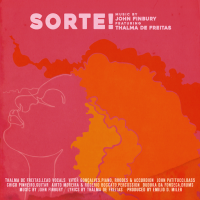 All About Jazz musician pages are maintained by musicians, publicists and trusted members like you. Interested? Tell us why you would like to improve the John Finbury musician page.