John is an accomplished jazz bassist and visual artist whose works display a mastery of form and improvisation.

He began playing the bass at the age of fourteen and while still in High School in Pittsburgh at the age of sixteen he began his professional career in a band with Tommy Turrentine on trumpet, Booker Ervin on sax, J.C. Moses on drums and Horace Parlan on piano. During his High School years John was also one of two art students who were chosen to attend special classes at the Carnegie Museum of Art.

John worked in Pittsburgh until he entered the Air Force in 1958 and was sent to Germany where because of his gifts as an artist he was given the title of “Artist, Special Services” a job that consisted mostly of designing posters and signs for special events. He also taught art classes to the officer’s wives where he was able to pick up a little extra money.

After leaving the Air Force in 1961 John enrolled at The Art Institute of Pittsburgh, studying on the GI Bill and also resumed his music career which took him first to Buffalo and then on to California with Jon Hencricks of Lambert, Hencricks and Ross fame in 1965.

John has also recorded with most of the above and has performed live at venues such as the Royal Festival Hall, the Vienna Opera House, and most of the major Jazz Festivals around the world and just about every major jazz club you can name.

In 1974 Guitar Player magazine commissioned John to sketch a series of six legendary guitar players. That same year John’s sketch of Duke Ellington graced the cover of the Monterey Jazz Festival’s program. In 1985, inspired by his friend Jim Casey a sculptor who worked on movie sets (including Francis Coppola’s Apocalypse Now), John began sculpting . Finally in 1988 John “retired” from his music career and devoted himself full time to painting and sculpting.

But the music kept calling and after four years John started playing again and has spent the last decade or so pursuing both careers, sometimes one more than the other. Show less

Grammy Grumblings, the John Heard Trio and Others 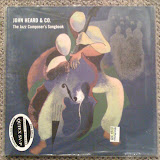 All About Jazz musician pages are maintained by musicians, publicists and trusted members like you. Interested? Tell us why you would like to improve the John Heard musician page.