For many, growing up in someone else's shadow is daunting, particularly when that someone is a looming legendary figure known world-wide. Eclipsed by that someone, you may constantly hear comparisons drawn as you try to establish yourself and your career.

This is not the case for John Lee Hooker, Jr. Born the son of Blues great John Lee Hooker, he acknowledges the significant contribution his father made to music, and knows he was never overshadowed by his father. Rather he was born to and carries on a legacy that's both broad and wide.

Born in the Motor City, John Lee Hooker Jr has Delta blues blood running through his Motor City veins. Born to this legendary bluesman, he grew up knowing that he was destined with this heritage. This he demonstrated as early as eight years of age, when Jr. performed on Detroit's WJBK radio, and by the time he was sixteen had played on the stage of such prestigious venues as Detroit's Fox Theater alongside other legendary blues greats such as Jimmy Reed. By the time he was eighteen, he would join his father to play on Hooker's Senior's album Live at Soledad Prison (ABC Records).

Unfortunately, while living the “life of a bluesman” he succumbed to the demons that surround it, derailing his musical career for many, many years. Drugs, alcohol, divorce, incarceration, and death nearly brought his once promising career to a screeching halt, but it was living the blues and his faith in the Almighty that resurrected Jr

In 2004, he released what he refers to as his “celebratory redemption.” Aptly named, Blues with a Vengeance (Kent Records), was like a wild bull in captivity; it came out with a vengeance. It earned him a Grammy nomination in the Traditional Blues Album category and a nomination for a distinguished W.C. Handy Award as Best New Artist Debut. The California Music Awards (formerly the BAMMYS) named Blues with a Vengeance 2004's Outstanding Blues Album of the Year, and the Bay Area Blues Society presented him with the 2004 Comeback Artist of the Year award.

His second release Cold As Ice (Telarc Records), released  June of 2006 showed his progression as a contemporary blues artist.

On his recently released All Odds Against Me, he continues to carry blues into the 21st century. The 12-song album, released domestically on Jr. Hooker's own Steppin' Stone Records and in Europe on Jazzhaus Records, is his first effort to include only new and original tracks, a contrast to either of his previous solo projects.

Additionally, it should be noted, with this release, Jr. Hooker has become the blues first animated super-hero. Collaborating with Frenchman Laurent Mercier at the Callicore Animation Studios in Paris, they have created a crime-fighting musician, singing in clubs by night and cleaning up the streets by day. Mercier, son of a French jazzman contemporary of Hooker Sr., dreamt up the idea as a way for the two sons to pay tribute to their fathers' legacies.  This animated feature, the first of three to be released, is found on this enhanced CD and is based upon the track “Blues Ain't Nothin' But a Pimp,” originally from Blues With A Vengeance. Show less

”... People keep saying the blues is dead, but there’s plenty of life in it with artists like Hooker on the scene!” Blues Revue

“It's extremely difficult to do what J.L.H. Jr. has done here: confront both the blessing and the burden of being heir to one of the music's most daunting legacies, while still retaining one's own identity.” Living Blues Magazine

“John Lee Hooker Jr., the son of a 20th Century blues legend, stands at the crossroads of a new era for blues with a confidence and mastery that will only intensify an already superlative family tradition. Boogie on!” Tom Mazzolini - San Francisco Blues Festival

“Hooker has crafted his own fiery, funky brand of stinging blues….pushes the boundaries of what a modern blues record can be” Centre Daily Times - State College, PA 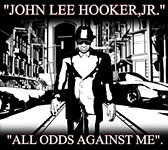 All Odds Against Me

All About Jazz musician pages are maintained by musicians, publicists and trusted members like you. Interested? Tell us why you would like to improve the John Lee Hooker Jr. musician page.