John Mayall was born 29th of November 1933 in Macclesfield, a small English village near the industrial hub of Manchester—a far cry at that time from the black American blues culture we are familiar with today. The eldest of three from humble working class origins, and in the shadow of WWII, this skinny English lad grew up listening to his guitarist father's extensive jazz record collection and felt drawn to the blues. Strongly influenced by such greats as Leadbelly, Albert Ammons, Pinetop Smith, and Eddie Lang, from the age of 13 he taught himself to play and develop his own style with the aid of a neighbor's piano, borrowed guitars, and secondhand harmonicas.

John Mayall's first brush with fame, however, was not for his music. As a teenager, he decided to move out of the house, and, showing the signature eccentricities and artistic qualities that have added to his legendary status, he moved into his backyard treehouse. This gained him notoriety enough to receive newspaper attention. Even more so, since, upon returning from a stint in Korea, he brought his first wife Pamela to live with him there.

From an art college training, to three years with the British Army in Korea, to a successful career in graphic design, his blues singing and playing took a back seat until he reached the age of 30. From 1956 until 1962, John was performing publicly on a part-time basis fronting The Powerhouse Four and, later on, The Blues Syndicate. It was then that Alexis Korner's Blues Incorporated pioneered what was to become known as The British Blues Boom of the Late 60's. Alexis was quick to encourage and help John make his move to London where he soon secured enough club work to be able to turn professional under the name John Mayall's Bluesbreakers. After a couple of years and a constant turnover of musicians, he met his soulmate in Eric Clapton, who had quit the Yardbirds in favor of playing the blues. This historic union culminated in the first hit album for the Bluesbreakers and resulted in worldwide legendary status.

After Clapton and Jack Bruce left the band to form Cream, a succession of great musicians defined their artistic roots under John's leadership, and he became as well known for discovering new talent as for his hard- hitting interpretations of the fierce Chicago-style blues he'd grown up listening to. As sidemen left to form their own groups, others took their places. Peter Green, John McVie and Mick Fleetwood became Fleetwood Mac. Andy Fraser formed Free, and Mick Taylor joined the Rolling Stones. As Eric Clapton has stated, “John Mayall has actually run an incredibly great school for musicians.”

In 1969, with his popularity blossoming in the USA, John caused somewhat of a stir with the release of a drummer less acoustic live album entitled “The Turning Point”, from which his song “Room To Move” was destined to become a rock classic. He received a gold record for this album. Attracted by the West Coast climate and culture, John then made his permanent move from England to Laurel Canyon in Los Angeles and began forming bands with American musicians.

Throughout the 70's, John became further revered for his many jazz/rock/blues innovations featuring such notable performers as Blue Mitchell, Red Holloway, Larry Taylor, and Harvey Mandel. He also backed blues greats John Lee Hooker, T-Bone Walker, and Sonny Boy Williamson on their first English club tours. The year 1979 proved to be a pivotal, transitional, and climactic year for John Mayall, both personally and professionally. With the public climate being at an all-time low for blues music, Mayall struggled to keep his live and recording career afloat. Personally, however, he began the 20+year relationship with his current wife Maggie (Parker, née Mulacek), a singer/songwriter from Chicago who had been hired with Harvey Mandel's band as Mayall's backup. And extreme misfortune came his way when a brush fire destroyed his hand-crafted and legendary Laurel Canyon home, taking with it his scrupulously-kept diaries, his father's diaries, master recordings, extensive book & magazine collections, Mayall artwork, and much much more. Determined to rise from the ashes, Mayall persevered.

Motivated by nostalgia and fond memories, in 1982, John (together with Mick Taylor and John McVie) decided to re-form the original Bluesbreakers for a couple of tours and a video concert film entitled Blues Alive, which featured Albert King, Buddy Guy, Junior Wells, Etta James, and Sippie Wallace and others. A whole new generation of followers could get a taste of how it all sounded live two decades before at the birth of the British Blues explosion. By the time Mick and John had returned to their respective careers, public reaction had convinced Mayall that he should return to his driving blues roots. As John McVie returned to Fleetwood Mac and Mick resumed his solo career, Mayall returned to Los Angeles to select his choices for a new incarnation of the Bluesbreakers. Officially launched in 1984, it included future stars in their own right, guitarists Coco Montoya and Walter Trout, as well as drummer Joe Yuele, who is still john's rhythmic mainstay.

With onstage popularity gaining each year, the 90's kicked in with the release of several John Mayall albums that have set new standards in rock blues: “Behind The Iron Curtain”, “Chicago Line”, “A Sense of Place”, and the Grammy-nominated “Wake Up Call” that featured guest artists Buddy Guy, Mavis Staples, Albert Collins, Mick Taylor. In 1993, Texas guitarist Buddy Whittington joined the Bluesbreakers and over the years he has energized the band with his unique and fiery ideas. Making his recording debut on Mayall's “Spinning Coin” album, he proved to be more than equal to following in the footsteps of his illustrious predecessors. After that, they released two modern classics: “Blues For the Lost Days” and “Padlock On The Blues”, (the latter co- produced by John and his wife Maggie, featuring a rare collaboration with the great blues legend John Lee Hooker, who had been Mayall's close friend since the early 60's). These albums have all garnered great reviews, critical and popular acclaim and represent Mayall's ongoing mastery of the blues and his continuing importance in contemporary music. In addition, Mayall released three CD's through his own private label, Private Stash Records. They are “Time Capsule” (containing historic 1957-62 live tapes-no longer available), “UK Tour 2K” (live recordings from the Bluesbreakers 2000 British tour), and a selection of solo performances from John entitled “Boogie Woogie Man”. Mayall continues to strive to remain true to the timeless music that first inspired this skinny young British lad, living in the shadow of WWII, to teach himself the guitar, harmonica and piano so many years ago.

This millennium has proved to be as productive so far. 2001: On “Along For The Ride”, Mayall re-teamed with a number of his former mates, including Peter Green, Mick Taylor, Mick Fleetwood and John McVie, as well as ZZ Top's Billy Gibbons, Jonny Lang, Steve Miller, Billy Preston, Steve Cropper, Otis Rush, Gary Moore, Jeff Healey, Reese Wynans of Steve Ray Vaughan's band and Shannon Curfman for an amazing display of blues power at its finest. Produced by David Z, this album featured Mayall duets with soul great Billy Preston, blues legend Otis Rush and young blues/rock teen sensation Shannon Curfman. “Along For The Ride” also features the first appearance together in over 30 years by Bluesbreakers alumni Peter Green, Mick Fleetwood and John McVie, who last appeared together as members of the original Fleetwood Mac.

In 2002: Mayall with the Bluesbreakers, again produced by David Z., recorded the August 27, 2002 release “STORIES”, which debuted the Billboard blues charts at #1, and followed it with an extensive world tour.

2003: John Mayall turned 70 years old. After extensive touring, John Mayall and The Bluesbreakers capped it off at a 70th Birthday celebration in Liverpool, with a concert in aid of UNICEF and featuring Eric Clapton, Mick Taylor and Chris Barber. This concert was filmed, recorded and released as a DVD and double CD in December 2003. To top off the year, BBC aired an hour-long documentary on John Mayall's life and career, entitled “The Godfather of British Blues”. Since then, this program plus a 1969 documentary were released on a DVD by Eagle Records entitled “Godfather/The Turning Point”, as well as “The Turning Point Sound Track” CD. In 2004, Private Stash released a live show from Australia on DVD �” “Cookin’ Down Under’ and John compiled a collection of his all time favorite classic boogie woogie tracks on a CD for Document Records which will be available on sale at the tour venues along with a box set of 4 Eagle CDs entitled “Essentially John Mayall”. This handsome collector’s item will also include a bonus disc of unreleased private live performances from Mayall’s archives featuring guitar greats Eric Clapton, Peter Green, Mick Taylor, Walter Trout, Coco Montoya and Buddy Whittington.

2005 saw the release of John’s 55th album, “Road Dogs” which was produced entirely by the Bluesbreakers and for which John wrote 13 of the 15 songs. (The remaining 2 titles were composed by Buddy, Joe and Hank). The Bluesbreakers have released a new studio CD entitled “In The Palace of the King,” that honors and pays tribute to the music of the Bluesbreakers’ long-time hero of the blues, Freddie King.

As for the man himself, the father of six and grandfather of six, John Mayall at 73 was recently awarded an OBE in the Queens Honours list and, as usual, shows no signs of slowing down. He plans to keep the blues alive for many more years to come. Show less

John Mayall:Live at the Marquee 1969 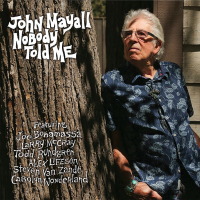 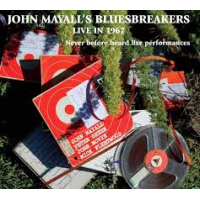 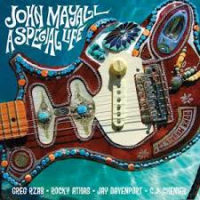 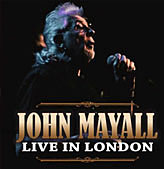 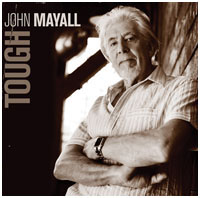 All About Jazz musician pages are maintained by musicians, publicists and trusted members like you. Interested? Tell us why you would like to improve the John Mayall musician page.