A working bluesman since his teenage years in the early 1950s, Johnny “Guitar” Watson scored numerous chart successes in the 1970s with a unique guitar-based sound that mixed the feel and instrumental technique of the blues with the bass-heavy sound of funk. Watson also excelled as a vocalist. His singing was by turns sexy, humorous, and political; his guitar playing exploited the full range of the instrument's powers. He was also a prolific songwriter. When Watson died in 1996 at the age of 61, he was receiving the most modern form of musical homage: rappers and hip-hop musicians quoting or “sampling” his recordings.

Watson was born in Houston on February 3, 1935. His father was a pianist who instructed his son in the rudiments of music, and at age 11 Watson was given a guitar by his grandfather, a preacher who disapproved of the blues and made the gift conditional on his never playing that most secular of musical forms. He could hardly help it, for the postwar years might be considered the golden age of blues guitar. Black guitarists who had moved to cities in the North and West from their Southern homes found ready audiences in urban barrooms and dance halls. They started to play electric instruments and rapidly honed their skills, making great leaps in both dexterity and imagination.

As a youth, Watson had heard the blues guitar of fellow Texan T- Bone Walker. He was also influenced by guitarist Clarence “Gatemouth” Brown, a showman given to unusual guitar performance styles and to such onstage surprises as playing a fiddle. Moving with his family to Los Angeles around 1950, “Young John Watson,” as he was billed on a 1953 single record, developed his own gift for showmanship, entering and winning a variety of talent contests and shows. This exposure led to work as a sideman (sometimes still on piano) in various West Coast jump blues and jazz bands of the time, including those led by Chuck Higgins and Amos Milburn.

Signed to the Federal label (a division of the famed Cincinnati independent King Records) in 1953, Watson began to create his own distinctive style with an instrumental single called “Space Jam.” Well ahead of its time, the record featured experimentation with reverb and feedback guitar effects, and it brought the young guitarist his first hit. He recorded for various small Los Angeles labels through the 1950s, including RPM, owned by West Coast rhythm-and-blues entrepreneurs the Bihari brothers.

One day, Watson and company co-owner Joe Bihari went to see the 1954 Sterling Hayden film “Johnny Guitar,” and Watson acquired the nickname that would stick with him for his entire performing career. During this period he also began to style himself as the “Gangster of Love,” after the title of a 1957 single Watson cut for the Keen label. This blues piece was successfully covered by rock musician Steve Miller in 1968 and again by Watson himself in 1978.

Watson toured with such luminaries as Little Richard and acquired a reputation for exciting stage theatrics. It is entirely possible that Jimi Hendrix followed Watson's example, for the two musicians shared similar backgrounds and aims. Watson had taken the possibilities of the blues guitar to the edge, and this edge was Hendrix's starting point. Both guitarists were active as sidemen and session players during the early and middle 1960s, backing leading soul-music acts of the day.

Watson scored a number six rhythm-and-blues hit with the orchestral accompanied “Cuttin' In” on the King label in 1962. During the 1960s he also teamed frequently with vocalist Larry Williams, with whom he toured successfully in Britain as well as in the U.S. and recorded the much-covered “Mercy Mercy Mercy” in 1967. In 1972, once again showing a knack for identifying the top marketing talent on the West Coast, Watson signed with the Berkeley, California-based Fantasy Records, which featured an impressive roster of soul musicians. He notched some minor hits for the label, produced recordings by other artists, and continued to find his services as a guitarist in demand, appearing on Frank Zappa's 1975 release, “One Size Fits All.” Zappa cited Watson's 1956 single “Three Hours Past Midnight” as the piece of music that had inspired him to become a guitarist himself.

Full-scale chart success finally came Watson's way when he signed with the British-owned DJM label in 1976. Given complete creative control by owner Dick James, Watson rose to the challenge with a series of recordings that merged his blues guitar skills with the emerging funk style, which was rhythmic, laid-back, and bass-heavy. “Johnny was always aware of what was going on around him,” recalled Susan Maier Watson (later to become the musician's wife) in an interview printed in the liner notes to the Collectables album The Very Best of Johnny “Guitar” Watson. “He was proud that he could change with the times and not get stuck in the past.”

Much like its white counterparts, black pop music is often dominated by young people, and Watson's emergence into the spotlight at the age of 41 was remarkable. His first two albums for DJM, “Ain't That a Bitch” (1976) and “A Real Mother for Ya” (1977) both were certified as gold records for sales of over 500,000 copies each. The title track of the latter album was a major hit and provides an excellent illustration of Watson's style on the DJM recordings. Handling vocals, guitar, and bass, he topped off his blues-funk fusion with a tense, sardonic rendition of lyrics that described a set of difficult circumstances;

Two other aspects of Watson's style seemed to point the way to the incipient rap movement: lengthy spoken interludes in such recordings as the 1978 “Gangster of Love” remake, and a group of songs that dealt frankly with poverty. Watson's music was indeed sampled in the 1990s by such stars as Ice Cube and Snoop Doggy Dogg. But Watson's activities were curtailed in the 1980s, although a series of summer appearances in France led to his becoming known there as the “Godfather of Funk.”.

The 1990s brought a creative resurgence for Watson with the release of the album “Bow Wow” in 1994, which was nominated for a Grammy in 1995. In March of 1996 he was honored with a Pioneer Award from the Rhythm & Blues Foundation, and his performing career appeared fully reinvigorated. However, he was stricken with a heart attack while performing at a blues club near Tokyo. He died in Yokohama, Japan on May 17, 1996. Show less 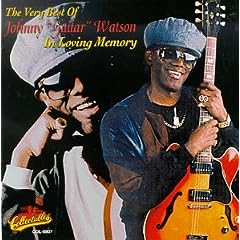 All About Jazz musician pages are maintained by musicians, publicists and trusted members like you. Interested? Tell us why you would like to improve the Johnny "Guitar" Watson musician page.