Blues guitarist Johnny Littlejohn was born John Funchess in Mississippi on April 16, 1931. A brilliant singer, songwriter and soloist, both on regular and especially slide guitars.

John worked at plantations when he was young, and his father gave him his first guitar. Johnny learned quickly, with family friend Henry Martin as his initial mentor. Henry was an influential Jackson Mississippi bluesman. Johnny left Mississippi around 1946 and wound up in Gary, Indiana by 1951.

Johnny played with Elmore James, Jimmy Reed, Eddie Taylor, Jimmy Rogers, Howlin' Wolf, Muddy Waters and others before going solo. A great friend and “co-conspirator” of John “Big Moose” Walker (piano, vocals) who was like a brother to him. The two were lifelong friends and played together on and off for nearly fifty years.

Johnny recorded for the Arhoolie in 1968, releasing “Chicago Blues Stars,” which garnered him much due recognition. He also went on to record for Bluesway, Black and Blue, M.C.M. and Rooster Blues labels in his lifetime. 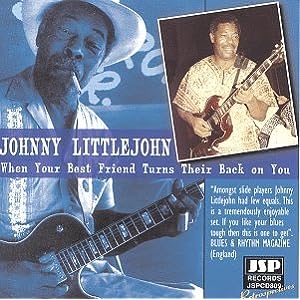 All About Jazz musician pages are maintained by musicians, publicists and trusted members like you. Interested? Tell us why you would like to improve the Johnny Littlejohn musician page.