Born in 1959 in Brooklyn, New York, John Patitucci began playing the electric bass at age ten. John began composing and performing at age 12. At age 15, he began to play the acoustic bass and at age 16 began the piano. He quickly moved from playing soul and rock to blues, jazz and classical music. His eclectic tastes caused him to explore all types of music as a player and a composer. John studied classical bass at San Francisco State University and Long Beach State University. In 1980, he continued his career in Los Angeles as a studio musician and a jazz artist.

As a studio musician, John has played on countless albums with artists such as B.B. King, Bonnie Raitt, Chick Corea, Wayne Shorter, Herbie Hancock, Michael Brecker, George Benson, Dizzy Gillespie, Was Not Was, Dave Grusin, Natalie Cole, Bon Jovi, Queen Latifah, Sting, and Carly Simon. In 1986, John was voted by his peers in the studios as the National Academy of Recording Arts and Sciences MVP (Most Valuable Player) on acoustic bass.

Since 1985, his association with Chick Corea has brought him worldwide acclaim and put him at the forefront of the jazz world. His many recordings with Chick Corea's Elektric Band and Akoustic Band, his six solo recordings for GRP Records and his subsequent recordings have brought him two Grammy Awards (one for playing and one for composing) and over fifteen Grammy nominations. In addition, his first solo recording, JOHN PATITUCCI, went to number one on the Billboard Jazz charts. He arranged and produced his own records as well as those of other artists. In1996, he signed with Concord Jazz and has released five records on their label: One More Angel, Now, Imprint, Communion and Songs, Stories and Spirituals. The two most recent recordings were nominated for Grammy Awards in the composition category.

John has won many magazine polls for his electric and acoustic bass playing, including Best Jazz Bassist in Guitar Player Magazine's 1992, 1994 and 1995 Readers' Poll and Best Jazz Bassist in Bass Player Magazine's 1993, 1994, 1995 and 1996 Readers' Poll. He has taught many seminars on playing and composing at prestigious music schools worldwide and was formerly the Artistic Director of the Bass Collective, a comprehensive school for bassists in New York City. John is also regularly involved with The Thelonius Monk Institute of Jazz and has taught at the Betty Carter Jazz Ahead program in Washington, D. C. in 2000.

In 2002, John began teaching at The City College of New York upon the retirement of Ron Carter from his teaching duties there. In 2003, John was appointed Associate Professor of Jazz Studies at City College.

After exploring many different writing styles on his own records and those of Chick Corea's, John continues to compose for many mediums. In 1994 he was commissioned to write a piece for six-string electric bass and string orchestra for the Italian chamber orchestra Suono e Oltre in Pescara, Italy. With John as soloist, the piece was performed in March of 1995 in Italy and in August of 1995 with the New Japan Philharmonic Orchestra in Tokyo. John was also commissioned to write a piece for the Turtle Island String Quartet, a group fluent in both classical and jazz music.

Since moving back to the New York area in 1996, John has continued to work with his own group, as well as many others. He has toured the world with his group, The John Patitucci Quartet. He was the featured Jazz Bassist at the 1999 International Society of Bassists convention. In 1998, John was a part of the Roy Haynes Trio, along with Danilo Perez on piano. This trio recorded a critically acclaimed album for Verve Records and has toured throughout the world.

In the Fall of 2001, John toured the United States as member of an all-star quintet called Directions in Music led by Herbie Hancock and featuring Michael Brecker, Roy Hargrove and Brian Blade. Subsequently they released a live CD entitled Live at Massey Hall which became a Grammy Award winner.

In the year 2000, John had begun working again with the legendary Wayne Shorter, touring the world in a new quartet featuring Danilo Perez on piano and Brian Blade on drums. This group released a live recording, Footprints Live, that was the result of their Summer 2001 World Tour and it was nominated for a Grammy. Following that, a studio recording was released in 2003 entitled Alegria which won a Grammy. Also in 2003, John took part in a commission project by the string quartet Elements entitled Snapshots. His string quartet composition was performed at Merkin Hall alongside works by composers John Corigliano and David del Tredici.

In January 2004, the Wayne Shorter Quartet played with the Orchestra de Lyon in Paris under the direction of the talented David Robertson (new musical director of the St. Louis Symphony Orchestra) for a week of concerts in various formations. The quartet then took part in a residency with the BBC Radio Orchestra in London.

Other highlights in 2004 include recording with legendary pianist Hank Jones, a summer reunion tour of Europe with Chick Corea, taking part in Michael Brecker's Grammy award winning recording Wide Angles, performing with pianist Kenny Barron at Orchestra Hall in Detroit, playing on the soundtrack of the remake of The Manchurian Candidate starring Denzel Washington, performing the Mendelssohn Sextet and a Bach Brandenburg Concerto on a chamber music concert at Concordia College featuring violist Lawrence Dutton of the Emerson String Quartet, touring with his own group and teaching seminars. Also in 2004, John recorded on Herbie Hancock's latest project (not yet released) and performed in concerts with The John Scofield Trio and Roy Haynes' Birds of a Feather group featuring Kenny Garrett and Nicholas Payton.

In 2005, John has recorded and/or played with Jack DeJohnette, Danilo Perez, Kenny Barron, again with Hank Jones and Steve Khan. At this year's Chamber Music concert at Concordia College, John premiered a piece he wrote for his friend Larry Dutton for viola and piano entitled Gardens and Pools, which was a commission work inspired by the painting of artist Sedar Arat. John also performed on a recording with his friend Jeremy McCoy, Assistant Principal Bassist with the Metropolitan Opera Orchestra entitled Dialogues with the Double Bass on Bridge Records. He recorded two original pieces and the Bottesini Duetto No. 3 for Two Basses with Jeremy on this recording. Also this year, John has continued to be busy with the Wayne Shorter Quartet, which recently performed again at Carnegie Hall as part of the JVC Jazz Festival and released a new recording entitled Beyond the Sound Barrier.

John has also begun touring with his new guitar trio featuring guitarist Adam Rogers and a revolving drum chair that can feature the likes of Brian Blade, Clarence Penn and Nasheet Waits. Please watch for an upcoming recording on Concord Records.

John currently resides in New York with his wife Sachi, a cellist, and their daughters. Show less 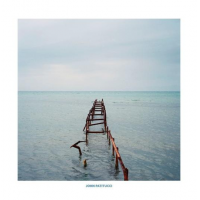 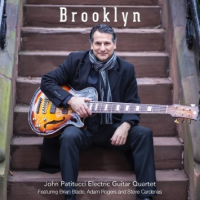 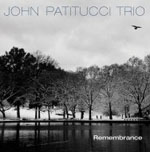 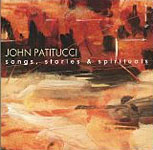 All About Jazz musician pages are maintained by musicians, publicists and trusted members like you. Interested? Tell us why you would like to improve the John Patitucci musician page.