John Philip Sousa had been a conductor since 1878 and had been a musician since about 1861. The Famous Sousa Band, his own organization, has been in existence for nearly forty years and for the twenty years immediately preceding he was the conductor of the Marine Band attached to the President's household.

Throughout his career as a conductor he had also been a composer, and it is an open question which of his two activities brought him the greater renown. It would be difficult to segregate the two, however, for his marches, his band and his personality served as a single unit in creating his unique reputation.

Mr. Sousa was born in Washington in 1854. The fact that his father was a musician and a member of the Marine Band which his son was later to lead, combined with the marital spirit of Civil War days of his youth in Washington, served to give his talent the bent which made him the “march king” to all the world for a quarter of a century.

His musical education began at 7. He had already made up his mind that he wanted to be a musician, and four years later he won all the medals at the conservatory, the beginning of his collection of decorations, which is said to be the largest in his field in the world. That same year he became a violin soloist, and two years later his father enrolled him as an apprentice with the Marine Band.

After several years with that organization he left it to join a theatrical orchestra, and early in this period of his career he had an opportunity to substitute for the conductor

. He was a conductor from that day on, and in 1880 he was appointed to head the Marine Band at the White House. Three years earlier, at 23, he had been first violinist in the orchestra conducted by Jacques Offenbach during the latter's tour of this country.

His service at the White House covered the terms of Presidents Hayes, Garfield, Arthur, Cleveland and Harrison. Many of his most famous musical works were composed during this period. One of these, “The Washington Post March,” was adopted by many dancing masters for use in teaching the two- step, which was just being introduced at the time. He sold that composition, which is still widely played, for $35.

Mr. Sousa organized his own band in 1892. It was not long before he attained world fame. It has been estimated that the band covered an aggregate itinerary of a million and a quarter miles, visiting nearly every city in this country, a great many in Europe and others in all parts of the world. The wide travels of the band throughout the United States on the semi-annual tours which were its customary program are considered to have contributed toward the furtherance of musical education in the nation.

At the Paris Exposition in 1900 Sousa's Band represented the United States as the official band from this country and was warmly acclaimed. After the exposition the band toured Europe, being the first musical organization from this country in a quarter of a century to undertake a tour of the Continent. Enthusiastic appearances were made in France, Germany, Belgium and Holland.

Five tours of Europe were made by Sousa's Band. Appearances by royal command were made before Queen Victoria and later before King Edward, the first at Sandringham and the second at Windsor.

Started on Tour of World

Mr. Sousa started out with his band in 1910 on a world tour which occupied fourteen months, concluding with a concert in New York. The leader and his 100 musicians covered 60,000 miles, visiting Europe, Africa, Australia, Tasmania, New Zealand, Honolulu and the Fiji Islands. Four years later they remained the entire season at the Hippodrome here, playing to 60,000 persons each week.

After having repeatedly refused to conduct his band over the radio, Mr. Sousa was at last persuaded to lead a selected group of fifty-two of his 100 musicians in a series of one- hour concerts, largely of his own compositions, in 1929. At the time it was reported he was receiving “more than $50,000” for his fee.

The famous bandmaster had been fearful that he would not “go over” on the radio because of a lack of personal contact with his audience, but within a few hours of his initial appearance on May 6, 1929, he was overwhelmed with congratulatory messages, including one from Commander Richard E. Byrd at Little America, in the Antarctic Region.

Mr. Sousa led the Marine Band in a new composition, the “Royal Welsh Fusiliers March,” at the dinner of the Gridiron Club in Washington on April 26, 1930, before President Hoover and a distinguished audience. The march was composed in honor of the cooperation of the famous Welsh regiment with the American marines in the relief of Tientsin in the Boxer uprising. He later conducted the Fusiliers' own band in the march and was entertained at their barracks in London.

In January, 1931, Mr. Sousa revealed that he was setting Edgar Allan Poe's poem “Annabel Lee” to music. His last public appearance in this city was on April 20, 1931, when he conducted the orchestra in “The Stars and Stripes Forever” at the annual Lambs Gambol at the Metropolitan Opera House.

One thing on which Mr. Sousa prided himself was his service record, it being his boast that he had seen service with the army, the navy and the Marine Corps. The latter was represented by his service at the head of the White House Band. During the Spanish- American War he served as musical director for the Sixth Army Corps. In the World War he organized bands at the Naval Training Station at Great Lakes, Ill.

Mr. Sousa composed more than 300 musical works, about a third of which were stirring marches. “The Stars and Stripes Forever,” composed on the homeward voyage after a tour of Europe, has been frequently reported to have been his own favorite. Others which have enjoyed wide popularity include “Semper Fidelis,” “The High School Cadets,” “King Cotton,” “El Capitan,” “Liberty Bell,” “Manhattan Beach,” “The Fairest of the Fair,” “The Invincible Eagle” and “The Thunderer.”

His musical works also included ten operas and a number of suites, as well as “The Last Crusade,” for orchestra, choir and organ, frequently considered his major work. He was also the author of several novels, as well as verses and magazine articles, and a compiler of volumes of musical pieces.

Mr. Sousa was a member of the Sons of the Revolution, a Mason, and a member of the Society of Authors and Composers. His clubs included the Salmagundi, Players, Musicians, New York Athletic, Lambs, Army and Navy and the Gridiron of Washington. He was an enthusiastic trapshooter, and was also interested in horseback riding and boxing. Show less 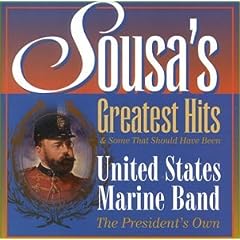 All About Jazz musician pages are maintained by musicians, publicists and trusted members like you. Interested? Tell us why you would like to improve the John Philip Sousa musician page.