It could be said that there are two types of jazz singers. Some function as instrumentalists, using the melody and lyrics as mere points of departure before they create abstract improvisations. The other type are those who are storytellers, digging deep into the meaning of the words they sing, paying respect to the composers’ melodies while still making each song their own. John Vance falls into the latter category.

Dreamsville features John’s interpretations of a dozen mostly vintage standards and “If You Go,” a haunting song that he co-wrote with pianist Jeff Colella. “It’s always a challenge when performing songs that have been around a long time, making them contemporary, fresh, and interesting, rather than rehashing someone else’s arrangement.” For this set, Vance is joined by Colella (who contributed the arrangements), bassist Trey Henry and drummer Kendall Kay, with two appearances by guest trumpeter-flugelhornist Stacy Rowles and three by guitarist Larry Koonse, who accompanies Vance perfectly on “My Foolish Heart.”

The melodies on Dreamsville, which include such standards as “I Hadn’t Anyone Till You,” “Invitation,” “Better Than Anything” and “Speak Low,” may be familiar but the interpretations are modern, heartfelt, and full of subtle surprises. Vance’s warm voice, which sometimes recalls that of Mel Torme in its tone, brings out the beauty and deep meanings in the lyrics. “My sentimental favorite on the CD is “Bluesette,” since I used to sing it for my daughter. I remember that Kendall Kay was messing around on the drums before we were going to record “Darn That Dream” and came up with a catchy funk groove. I was going to record a much more traditional version of that song but we liked Kendall’s rhythm so well that we thought it would be fun to use it. That’s why I like working with these guys; they keep on coming up with unexpected ideas.” Another surprise is “Dreamsville,” which proves to be quite effective in 5/4 time. Throughout the CD, Vance gives a great deal of warmth and understanding to the words he sings while swinging lightly.

“Because I have a background as an actor,” explains Vance, “I think of singing as a means of telling a story. When I’m selecting material, I take a hard look at the lyrics and ask myself if the words tell a story I want to convey. If a tune, such as “You Don’t Know What Love Is,” is darker than I would normally choose, I put my actor hat on and get to the meat of what the song is about. I don’t believe in skimming the surface. Singing is very personal to me. I can’t hide as a singer. It’s the real me, not a character I’m playing.”

Raised primarily in Arlington, Virginia, John Vance remembers going to record stores with his father when he was quite young and exploring the music of jazz and pop singers of the era. He studied classical piano for many years, switching to pop when he was in high school. In 11th grade when he auditioned for a musical in school, it was the first time that he realized that people were amazed by his singing abilities which he had formerly taken for granted.

Always interested in acting, Vance earned a B.A. degree in Drama from the University of Virginia. Initially, after graduating, he worked as both an actor and a singer. An early highpoint was singing next to Jack Jones and Kay Starr in “The Glenn Miller Band Reunion” for PBS. But he soon made the decision to concentrate on a career as an actor. “I felt at that time the only way I could make my singing career work was to tour, and I didn’t want to leave my daughter and be out of town all of the time.” He built up a strong career as a character actor, and among his many credits have been roles on television (“Two And A Half Men,” “Malcolm In The Middle”), movies (the upcoming “Leatherheads,” with George Clooney and Renee Zellweger, as well as “Back To The Beginning,” “The Natural,” “How I Saved The World,” and “Stitches”), numerous theatrical productions, and television commercials.

Time passed, and in 2001 Vance returned to singing, performing mostly in Los Angeles area nightclubs. In 2003 he made his recording debut as a leader with It’s All Right With Me. “I’m very proud of It’s All Right With Me, which we recorded in just two days, but I’ve grown as a singer since then. Dreamsville is a bit more sophisticated, the arrangements are less traditional, and overall it’s more of a jazz record. I’m excited about finally sending this project out into the world!”

John Vance is quite optimistic about the future. “For the next record, which I’m already thinking about, I hope to record more originals. I’m always working on learning new material and then having fun performing it in public. My future musical goals include doing what I said I was not going to do all those years ago: taking my music on the road and performing in many different cities.” That is certainly very good news for his fans and for lovers of the American popular song who will be able to experience John Vance’s tasteful renditions of classic standards in person, in addition to enjoying Dreamsville. Show less

Read more articles
“He has a jazz sensibility that sets him apart from the others.” --All About Jazz

“...Vance reveals his background as an actor and delivers an emotional reading worthy of an Oscar nomination.” --Jazz Review 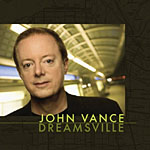 It's All Right With Me

All About Jazz musician pages are maintained by musicians, publicists and trusted members like you. Interested? Tell us why you would like to improve the John Vance musician page.