Biography Training: Son of the late Indian composer and Indo-Jazz Fusions founder John Mayer, Jonathan studied sitar from Clem Alford, Pandit Subroto Roy Chowdhury, both of Senia Gharana, and Ustad Wajahat Khan of Imdadkhani Gharana. He also studied composition from his father and later with Andrew Downes at the Birmingham Conservatoire where he gained a B.Mus (Hons).

Who he's worked with: Jonathan is currently one of the most versatile sitarists in the world, having studied both Indian & western music. From these traditions he has created a unique creativity towards the sitar, seeing it as a instrument and not a genre. His ability to read western notation has enabled him to work on many collaborations and the wide range of artists Jonathan has worked with reflects the diversity in his playing: Joji Hattori, Paul Weller, Kathryn Tickell, BBC Concert Orchestra Kumar Bose, Kavita Krishnamutri, Kuljit Bhamra, Erich Gruenburg, Rohan De Saram, Kenny Wheeler, The Orlando Consort, John Wilson, Bombay Dub Orchestra, Future Sounds of London, Sarah Brightman, Noel Gallagher, and Sir Paul McCartney. What he's worked on: Jonathan has worked in most genres both live and in the studio including rock, pop, British folk, Bulgarian folk, plain chant, renaissance, baroque, western contempory, jazz, jazz fusion, Hindustani classical, funk & dance. One of his main attributes is having an electric sitar which gives more flexibility in the dynamic sound world of popular music, further more Jonathan is the worlds first exponent of the newly developed 'pygmy sitar'

. What he's working on/where he's played: Jonathan's currently involved in a number of collaborative projects: The Teak Project - The Teak Project represents a collaboration between three of Britain's finest young improvisers. These musicians have come together simply to make their own music, unfettered by the strictures of defined categories like jazz or Hindustani classical. In doing so they have drawn from their own wealth of experiences and created a space in which to let their instruments breathe. Mantra - With The Orlando Consort & Kuljit Bhamra, Mantra explores the music the Portuguese missionaries took to India in the early 16th Century. Out of Genre - Jonathan's debut solo album with Bach transcriptions for sitar, contemporary improvisations and featuring Keeny Wheeler. Amorphous Androgynous - Jonathan currently plays in this superb phychedelic rock group featuring Gaz Cobain from Future Sound Of London. Over the years Jonathan has played all over the world as a soloist and in collaboration including India, Sri Lanka, UK, Abu Dhabi, Monte Carlo, France, Germany, America, Russia, Australia & Bangladesh. And venues/festivals including Cheltenham, Glastonbury, The big chill, Kazan peace festival, Lamar tree, Spitalfields, The Royal Festival Hall, City of London,Breacon jazz and a private performance at 10 Downing Street. Jonathan is also co-founder of First Hand Records. Show less

Jonathan Mayer Sitar
Chandigarh Live: “..In fact, be it in individual piece or in his father John Mayer or in consonance with other artists, Mayer played Sitar with deft dexterity.” The Times UK : “...and some exhilarating solos from Jonathan on Sitar.....” Timeout Uk: “.....Jonathan weaves a gorgeous modal jazz solo on the Sitar in 7/4 Classic CD UK: “.... The Players are all astonishingly virtuosic from Mayer's son, Jonathan, on the Sitar....” ”A breath of fresh musical air.” - Toronto Star ”History in the making.” - Jazzwise Magazine ”Mayer clearly knows what he's doing on the sitar.” - Audiophile ”...Mayer's clear facility on his instrument.” - Songlines ”...pushes at the limits of what we expect from the sitar.” - Songlines 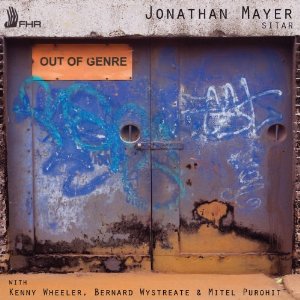 Jonathan Mayer
Out Of Genre

All About Jazz musician pages are maintained by musicians, publicists and trusted members like you. Interested? Tell us why you would like to improve the Jonathan Mayer musician page.