At a young age, New York based musician Jon Sheckler is proving to be a well versed musician and an up and coming band leader. All About Jazz calls him and his trio “ones to watch” and that Jon's music is full of “mischievous Dudley Moore-like playing.” As a drummer, Jon has played with some of today's leading musicians and entertainers including trumpeter Clay Jenkins, vocalist Catherine Jensen-Hole, guitarist Al Rowe, and international recording artist Darrius Willrich. Since moving to New York in 2014, Jon has been featured at Rockwood Music Hall, Club Bonafide, Sidewalk Cafe, Williamsburg Music Center and ShapeShifter Lab. In 2017, the trio began its residency at Caffe Vivaldi.

In 2010, the UNC/Greeley Jazz Festival recognized Jon as an outstanding musician and his composition “Water Marks” won 2009 UNC Jazz Composers Contest. Sonarchy Radio has twice featured Jon in 2010 and 2013 when he debuted a suite for octet titled Bodies of Water.

With the release of Cable Street, featuring Darrius Willrich and Nathan Parker, Jon became a featured artist for Critical Sun Records. The track “Pensive Matters” was recently chosen as a Download of the Day by All About Jazz in 2013. Jon has also worked with Grammy winning producer and engineer Bubba Jones and singer-songwriter Jackie Sullivan.

Bill Buck, Soul Jazz and Funk ”...accessible trio jazz which in places harks back to the classic soul-jazz of the 60s and elsewhere echoes the music of people like Bob James.”

All About Jazz ”As enchanted by the piano as the drums. V[ery] cool. Ones to watch.” 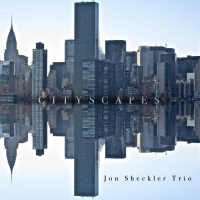 All About Jazz musician pages are maintained by musicians, publicists and trusted members like you. Interested? Tell us why you would like to improve the Jonathan Sheckler musician page.