Jon Miller is a drummer, drum instructor and band leader based in Victoria BC, Canada. Before locating to the West Coast in 1999 he lived in Montreal, Philadelphia and Amsterdam, playing drums in a wide range of formations. He holds a B. Mus in Jazz Performance from McGill University and he has studied drums with Alan Dawson, Martin Bradfield, Peter Magadini, Louis Williamson, Marvin “Smitty” Smith and Barry Elmes. He has shared the stage with (among others) Jeff Healey, Charlie Hunter, Skip Bey, Vic Vogel, PJ Perry and Hugh Fraser. Jon currently divides his time between teaching drums, freelance playing and leading his own groups including the Jon Miller Quartet.

“The Jon Miller Quartet's debut release, “Orchidology” promises to be one of the top albums launched on the West Coast this year.” Rick Gibbs -islandjazz.ca ”...exceptional jazz....one of those albums where it seems the musicians are just meant to play together. Lucky for us they found one another.” Shelley G. -X 92.5 Radio Kamloops “One of the local jazz scene's brightest young stars...” -Victoria Times Colonist “...phenomenal...can stand with the best music being produced in the country today.” Rick Gibbs, -islandjazz.ca 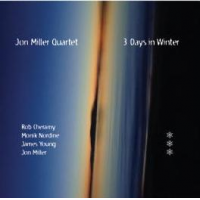 All About Jazz musician pages are maintained by musicians, publicists and trusted members like you. Interested? Tell us why you would like to improve the Jon Miller musician page.