Was born in Barcelona in 1965 and studied jazz from the prestigious international jazz seminars (with Bill Dobbins, Quest, Marc Johson and Walter Bishop Jr., among others) that took place in Spain around 1980.

His first album as leader came in 1993, with “Dr. Jekyll” (on the Fresh Sound New Talent series) and presented it among the XXV Barcelona International Jazz Festival, following up the appearance with in 1995 at the XXVII Barcelona International Jazz Festival , in which he showed off, for the first time,his Homage To Wes Montgomery, a firm favourite of José’s throughout his life. 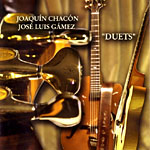 All About Jazz musician pages are maintained by musicians, publicists and trusted members like you. Interested? Tell us why you would like to improve the Jose Luis Gamez musician page.