Pianist Joshua White (born August 17, 1985) had parallel musical training in both classical and gospel music traditions before encountering the music most commonly referred to as “jazz”, at the University of California, San Diego summer camp in 2003. He began formal piano training at the age of seven with a private instructor, and was subsequently immersed into the music of Bach, Mozart, Beethoven, Chopin, Rachmaninoff, and others. After competing in several classical piano music competitions and also becoming the organist/pianist at his local Church, Joshua (at the age of 18) chose to focus his musical studies on “jazz” and improvised music traditions, drawing inspiration from its many innovators. He dove into the music head first with the help of world-renowned musicians like composer Anthony Davis, saxophonist David Borgo, flutist Holly Hofmann and piano master Mike Wofford. “Joshua was the most devoted student I’ve ever worked with by far,” says Wofford. “Absolutely focused and with a great intuitive grasp of the music, even at that early stage.”

In the years following, White made incredible strides through the Southern California jazz community, playing with virtuoso trumpeter Gilbert Castellanos, alto saxophone legend Charles McPherson, bassist Marshall Hawkins, tenor saxophonist Daniel Jackson, and former Anthony Braxton sideman, Mark Dresser. Dresser hand-picked the young musician for his West Coast Quintet, which virtuoso trombonist Michael Dessen, flutist Nicole Mitchell and drummer Kjell Nordeson. “Joshua is a super-bad young pianist,” Dresser said. “I see him as a singular talent. He brings so much to the table.” White’s virtuosity is never about empty displays of technique. He has the uncanny ability to blend the overtly lyrical with passages of tumultuous tension without losing the listener in the process. He is, in short, a cultural improviser, taking his inheritance and venturing into possibility.

In 2011, White entered the prestigious Thelonious Monk International Piano Competition in Washington D.C., ultimately placing second out of 160 competitors from around the world. Herbie Hancock was one the judges. “Joshua has immense talent,” Hancock told music critic George Varga of the San Diego Union Tribune. “I was impressed by his daring and courageous approach to improvisation on the cutting edge of innovation. He is his own man. I believe that Thelonious Monk would have been proud of the performance of this great young artist…” New York Times jazz critic Ben Ratliff was at the competition. “He pressed hard against the rhythm section and improvised with form, telling the bassist Rodney Whitaker and the drummer Carl Allen what to do and when, accelerating and decelerating, suddenly going free. (Nobody else did that.) … Mr. White used a lot of dissonance and clutter, but it was provocative, chord-related clutter, not the brilliant-soloist kind made mostly with the right hand. It was a sound worth returning to…”

For the last several years, White has been in demand as one of the Nation's most creative and technically accomplished pianists. He performs regularly at Dizzy’s (San Diego), Blue Whale (Los Angeles), The Loft (La Jolla), the Athenaeum Music and Arts Library (La Jolla), and numerous other venues on the West Coast. As well as currently touring internationally with both the David Binney Quartet and The Rudresh Mahanthappa Quintet (China, Portugal, Spain, Netherlands, Sweden, Belgium, Norway, Serbia, France, Greece...) 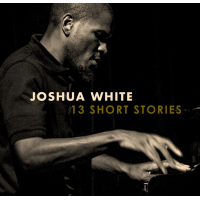 All About Jazz musician pages are maintained by musicians, publicists and trusted members like you. Interested? Tell us why you would like to improve the Joshua White musician page.