Finnish saxophonist and composer Jouni Järvelä has released his second CD as a leader. Following the highly-acclaimed debut record Lento (1999), the new outstanding record by the Jouni Järvelä Group is called A Grand Day Out (Live). The live recording was made during the band's tour of Finland in April 2005.

A Grand Day Out (Live) features, along with Jouni Järvelä's magnificent playing on soprano, alto, and the rare C-melody saxophones, the most prominent of Finnish musical talents: Samuli Mikkonen on piano and synthesizers, Marzi Nyman on guitars and Lasse Lindgren on electric bass and fretless acoustic bass guitar. The amazing interaction of the group is accented by the preeminent leading European drummer, Norwegian Audun Kleive.

The compositions on the record are for most part by Järvelä and Mikkonen. This record is a fantastic chance to get to witness, in unedited live performance, the wide variety of Jouni Järvelä Group's highly personal compositions, soaring improvisations and open communication, with moods ranging from rough to fragile. 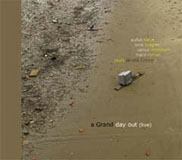 A Grand Day Out

All About Jazz musician pages are maintained by musicians, publicists and trusted members like you. Interested? Tell us why you would like to improve the Jouni Jarvela musician page.