Born in 1949 when rationing was still part of daily life and Britain was recovering from the greyness and worry of the war years, Judy was the third of four children whose early years were spent in a prefabricated bungalow surrounded by gardens in North London. Moving into a maisonette in Wood Green when Judy was 10, she and her sisters and brother were edging into the teenage years in the heady mix of rock and roll teddy boys, beatniks and jazz, the stories of folk and the pure joy of pop. All three girls had started piano lessons but only Judy continued to the fury of her sisters when the piano lesson coincided with the start of Ready! Steady! Go! (or was it Popeye?) and the TV was turned off so Judy could learn another bit of music. Her teacher was very into dance music, so the music ranged from quicksteps to foxtrots and that kind of stuff. Judy asked for and was given the sheet music for ‘Let There Be Love’ and was miffed that it didn’t include instructions on how to play like George Shearing. However.Onward to the years of youth clubs, then folk, blues, jazz and soul clubs, often all housed in the back rooms of the same pub but on different nights, and the first of the bands at the age of 16- ‘Judy and the Folkmen’ who practised a lot and performed very little, but whose debut (and only) gig at the Hornsey Conservative Club’s Candlelight Soiree was a triumphant success until you saw the newspaper photo of some rather terrified Soiree-ers being serenaded while they ate their supper..

But with a newly acquired autoharp in hand (easier to carry than a piano) Judy formed a loose connection with other musicians in the Muswell Hill area, and became the longhaired girl singer when an acoustic set was required with the musicians who later became Fairport Convention. Oh that was a time of eclectic listening to music from anywhere and everywhere and it was soaked up by the young band like sponges. Songs were given the unique Fairport treatment and arrangements and became something wonderfully different from their origins. Judy was working as a library assistant with the intention of becoming a proper Librarian, but the lure of the drafty van with a hole in the floor was too strong and off the band set in search of their future.

One album later and the band had left Judy and gone off in a different direction, but she met the young Ian McDonald and they joined with the wondrous Giles Brothers and Robert Fripp. In the flat in Brondesbury Park Road in Kilburn, Peter Giles recorded the tentative musical collaborations of Judy and the four young men. Romantic connections between Judy and Ian faded and Judy left the four musicians who later became the fantastic King Crimson, but they retained several of the songs in their repertoire that had arrived with Judy and Ian at the very beginning of the meetings.

Let loose in the world of music once more, a new connection was made via Martin Quittenton who shared a flat with his girlfriend and Judy. Martin from the band Steamhammer was a session musician for Rod Stewart and co-wrote ‘Maggie May’ and ‘You Wear It Well’ with Rod. Another of the session musicians was Pete Sears who together with Jackie McAuley and Judy formed a band. Jackie had been part of Them and the Belfast Gypsies but had thought to try his hand at something quieter and more delicate. Pete Sears heeded the call to head off to America to join with Leigh Stephens in Blue Cheer and thence onto Jefferson Starship and Hot Tuna and all those great American rock bands while Judy and Jackie continued as the duo Trader Horne. Barry Murray recorded them for the psychedelic Pye label, Dawn, - ‘Morning Way’ was released along with two singles.and a whizzing around the country began. Judy found the continual travelling difficult and became pretty exhausted and having met her future husband left the band..

A few recordings were made with various people and an interesting sidestep into the world of strange jazz with Lol Coxhill, Steve and Phil Miller in a band known as Dyble, Coxhill and the Miller Brothers (or Penguin Dust for short) but Judy left London with Simon and returned to library work in Northamptonshire. Eventually a small cassette manufacturing business began to take up their time and they moved back to Oxfordshire. Judy had to all intents and purposes given up music and closed her ears to concentrate on bringing up their two children and running the cassette duplication business For the next 30 years that was her life, until the death of Simon and the leaving home of her children and the invitation of Fairport to play at their annual festival gradually moved her back into the world of creating music.

Starting with Marc Swordfish of Astralasia three albums were created and then by the tentacles of the internet ‘Talking With Strangers’ was created with Alistair Murphy and Tim Bowness. With the wonderful assistance of many fine musicians, including Robert Fripp, Ian McDonald, Pat Mastelotto, Simon Nicol, Julianne Regan, Jacquie McShee and Celia Humphris, this album was to be an album that everyone connected with its creation was proud of. The19 minute Harpsong was adapted from an autobiographical poem of Judy’s life and brought together musicians from her past, present and future ending in a joyous assertion that ‘Nothing could go wrong..’

Now working with Alistair on a new album, ‘Flow and Change’ which will be different again to the previous work, yet will still have connections to her history Judy continues to investigate new and occasionally slightly weird byways and collaborate with interesting musicians like the Norwegian band Sleepyard and whatever comes her way in the future. It’s keeping her very amused..

‘Talking With Strangers’ was originally released in the UK but is now properly and completely released in the US and Canada with two additional bonus tracks for your delight… https://www.gonzomultimedia.com/product_details/15535/Judy_ Dyble-Talking_With_Strangers.html

The new album 'Flow & Change' will be released by Gonzo Multimedia in June 2013 More information here at www.judydyble.com where there are pictures and tunes and all sorts of information… And find me here on Facebook https://www.facebook.com/pages/Judy-Dybles-Newborn- Strangers/126882790740456

Prog-Folk Legend Judy Dyble Releases The Third Masterpiece Of Her...

“...this lovely eight song set...the showstopper has to be the 19-minute autobiographical 'Harpsong' with an all-star line-up including Robert Fripp and Pat Mastelotto.” - Grant Moon, PROG Magazine

“It is superbly ambitious, ornate and atmospheric” - The Mail On Sunday 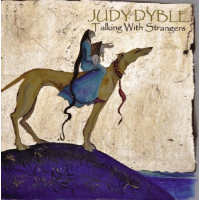 All About Jazz musician pages are maintained by musicians, publicists and trusted members like you. Interested? Tell us why you would like to improve the Judy Dyble musician page.