”If you want to know what real jazz singing can be (but rarely is), listen to Judy Niemack...She is a musician in the truest sense, having mastered her instrument (a beautiful one), and her chosen language and crafted her own style” —Dan Morgenstern

Throughout her career, Judy Niemack has accomplished a great deal as a singer, educator, lyricist, composer, and inspiration to younger jazz vocalists. Yet with all that she has done thus far, one gets the impression that the best is yet to come. “I love standards and have performed them all of my life but this is a new era and it is time to create new music,” she says. “I’m open to all forms of vocal improv and I’m very interested in mastering the art of music and pushing the art form forward to new places.”

Born and raised in Pasadena, California, Judy gained experience singing in her church choir. She first heard jazz through her mother’s Nancy Wilson records, and discovered that she could easily sing harmonies when she and her sister sang background vocals behind her brother, who played guitar and sang lead. As a child and as a teenager, she sang in a wide variety of settings including musical theatre, rock bands, with folk music groups, and in a jazz vocal quartet.

Judy studied classical singing but the turning point in her young career was when she met the great tenor-saxophonist Warne Marsh, who followed in the footsteps of his teacher pianist Lennie Tristano by becoming an important jazz educator. “I became Warne’s first vocal student. He treated me like a horn player. He assigned me solos by Charlie Parker, Roy Eldridge and others to learn. I learned about improvising from him. He called it instant composition.” Judy attended Pasadena City College where she had lessons with alto saxophonist Gary Foster, and studied classical singing at the New England Conservatory and the Cleveland Institute Of Music. When she returned to the Los Angeles area, she continued studying with Marsh and, after moving to New York in 1977, her first important gig was performing at the Village Vanguard for a week with Marsh. She made her recording debut, leading the first of her ten CDs, By Heart for the Sea Breeze label, which documented her association with the saxophonist.

“During that period, I was strictly an improviser, with no thought given to entertaining or paying attention to the audience. But eventually I started focusing on the lyrics, and how to communicate with them, and then I grew as a singer.” Starting in the late 1970s, Judy became a talented composer, and a lyricist who wrote words to such pieces as Clifford Brown’s “Daahoud,” Thelonious Monk’s “Misterioso,” Bill Evans’ “Interplay,” Richie Powell’s “Time” and Duke Jordan’s “Jordu,” and songs by the likes of Lee Konitz, Pat Metheny, Dexter Gordon, Gigi Gryce, Elmo Hope, Kenny Dorham, Curtis Fuller, Bob Brookmeyer, Idrees Sulieman, Richie Beirach, Don Grolnick, Steve Slagle, Mike Stern, Johnny Griffin and many others. One of the driving forces behind her writing is the desire to have lyrics that are more modern and relevant than many that are part of the famous but overly familiar songs of the 1930s and ‘40s.

Judy Niemack starting teaching jazz singing and improvising in the late 1970s. She has since become one of the most influential educators in jazz, and a pioneer of vocal jazz education in Europe. She taught vocal jazz at the New School For Jazz, William Patterson University, Long Island University, and New York City College and has been part of the staff at the Janice Borla Vocal Jazz Camp since 1990. After moving to Europe, she joined the jazz faculty at the Royal Conservatory of Brussels, Belgium in 1993, and two years later became the first Professor of Vocal Jazz in Germany. She also teaches at the Musikene Conservatory in San Sebastian, Spain, has taught at conservatories in Holland and Belgium, and leads workshops throughout Europe and the world

“Our generation is probably the first to pass on information to younger singers willingly and very openly. What I love about teaching is being surrounded by music all day long, every day. I love being with singers and helping out younger vocalists, leading people onto the path towards where they want to go.” Judy’s vocal improvisation method book and CD “Hear It And Sing It! �” Exploring Modal Jazz” was published by Second Floor Music in 2004, and her “Pro-Vocal Jazz Standards” was published by Hal Leonard in 2008.

As a performer, Judy has thus far recorded ten albums as a leader including her debut My Heart, Blue Bop (Freelance) with Cedar Walton, Long As You’re Living (Freelance), Heart’s Desire (Stash) which is a set of duets with pianist Kenny Barron, Straight Up (Freelance), duets with pianist Mal Waldron called Mingus, Monk and Mal (Freelance), Night And The Music (Freelance), About Time (Sony Jazz) with Lee Konitz and Jeanfrancois Prins, What’s Going On (Temps), and Blue Nights (Blujazz) with Gary Bartz and Jim McNeely. She has also recorded an upcoming CD for Blujazz centering on Summer themes called “Sun Dance”.

“Blue Nights shows off my mainstream traditional side. I recorded it to share a modern take on some of my favorite songs, which I have long loved. And my next CD, Sun Dance, celebrates my favorite season: Summer. Meanwhile I'm working on a recording for Artistshare, about singing something completely new; a project with all of my own lyrics.” Judy Niemack looks forward to the future with optimism and enthusiasm. “I have a new book and CD coming out - “Exploring Blues”, which includes performances not only by me, but also by Sheila Jordan, Mark Murphy and Darmon Meader. I think it will help to raise the bar in vocal jazz education. In general, I hope to continue doing what I’m doing: performing, teaching, writing lyrics, working on new collaborations, and always creating new and interesting music.”

Whatever the future holds, one can be certain that Judy Niemack’s future projects will be inventive, stimulating and full of joyful surprises. Show less

Judy Niemack "Something to Say" Jan. 19-20 at Sweet Rhythm

”Her creative odyssey provides a fascinating illustration of the high road to mastery that transcends the limitations of genre...a vocalist of theatrical depth and consumate syllabic invention. Ever since her debut with (Warne) Marsh at the Village Vanguard, audiences have marvelled at the grace with which Niemack scats.”

“To hear Judy Niemack's immaculate delivery of poetic romance and lilting spirit from the classic American songbook is to believe she was weaned on it...She didn't merely dabble in folk, opera, jazz, avant-garde and the great American standards; she studied and explored them..

”Her creative odyssey provides a fascinating illustration of the high road to mastery that transcends the limitations of genre...a vocalist of theatrical depth and consumate syllabic invention. Ever since her debut with (Warne) Marsh at the Village Vanguard, audiences have marvelled at the grace with which Niemack scats.”

“To hear Judy Niemack's immaculate delivery of poetic romance and lilting spirit from the classic American songbook is to believe she was weaned on it...She didn't merely dabble in folk, opera, jazz, avant-garde and the great American standards; she studied and explored them... Few singers have a better grasp of melody, harmony and phrasing, or such a rich instrument with which to express them.”

“She puts over a tune with passion and singular phrasing. She slaloms with streamlined precision through tricky be-bop lines and changes. She twists, turns, scats, leaps and bounds with Olympian grace...displaying admirable control, balance and understatement...Classy.”

”Judy Niemack digs deeply into the innards of the compositional body eclectic and makes no detectable missteps. She crosses her Rubicon with the grace and confidence of those who know just where the shallows are and, therefore, appear to walk on water. Her voice remains a vehicle of startling clarity with all the range and rubato she might need for either a scat or improvisatory horn mode, as well as the filligreed touch of texture with which she breathes into life an intelligent lyric.”

”To my mind, Judy Niemack is one of the best, and purest jazz singers ever. Besides a voice with the clarity of a mountain stream, accuracy of pitch and time that is a wonder to hear, perfect diction and sensitivity to lyrics, she has a disciplined improvisational gift that makes her scat-sung lines music instead of the show-biz exhibitionism scat-singing has all too often been with others.”

“You need have no reservations about Judy Niemack, a young veteran of the New York club scene who epitomizes the term “jazz singer”. Niemack's irrepresible swing, savvy scatting and dead-on intonation allow her to improvise solos that seem more horn than voice....her way with a lyric will warm the hearts of both romantics and musical adventurers as she tames tough jazz lines written for saxes, not singers.”

”Judy has an inner sweetness to her voice....and a jazz edge. The combination is effective. She's musically sophisticated. She befriends the pulse and interacts with jazz musicians well. She draws from feelings and experiences, using melodies by jazz composers- some of them quite challenging- as her basis for creativity...” 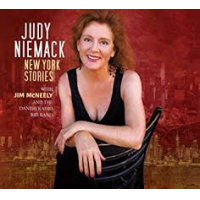 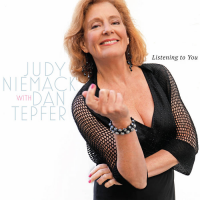 All About Jazz musician pages are maintained by musicians, publicists and trusted members like you. Interested? Tell us why you would like to improve the Judy Niemack musician page.