Born in Rio de Janeiro, Brazil, Julia Bomfim is an exceptional violinist based in Boston, MA. Her unique style combines Classical music and Brazilian music with other South American flavors. Half Argentinian from her mother side and half Brazilian, Julia's energetic and versatile playing have ensured her place in these various musical genres.

Born into a family of artists, Julia began her music studies at the age of seven. Inspired and encouraged by her father, the renowned flutist Marcelo Bomfim, the violin became the focal point of her early childhood.

In 2013, she graduated from the Federal University of Rio de Janeiro (UNIRIO) with a Bachelor of Music degree. While completing her studies at this prestigious institution Julia was selected to participante and perform in distinctive music festivals around the world, such as the Académies Internationales d'été du Grand Nancy (France), L’Acadèmia Internacional de Música de Solsona (Spain), Summit Music Festival & Institute (United States), Festival Villa-Lobos (Brazil).

In 2011 she earned a coveted scholarship to study for one year at the Hartt School of Music (University of Hartford) under the guidance of internationally acclaimed violinist Anton Miller.

Striving to continue her musical studies at a higher level, she moved to the U.S. for a longer period and in 2016 she received her Masters degree in Violin Performance from Longy School of Music of Bard College under the guidance of violinist Laura Bossert.

During her time at Longy, Bomfim was awarded a highly competitive teaching assistantship in the prestigious El Sistema Side by Side program where she served as an instructor and mentor. Fluent in Portuguese, Spanish and English, Julia's language skills have significantly contributed to her teaching success. Shortly after, Julia joined the music faculty of the prestigious Dana Hall School in Wellesley, MA, where she serves as a violin and viola instructor until today. In 2017 she was accepted to the New England Conservatory continuing education where she has been opening her musical landscape earning a certificate in Jazz performance under the tutelage of highly acclaimed musicians and pedagogues, David Zoffer and Tucker Antell.

Julia's beautifully refined playing incorporates a variety of influences, from classical and tango to choro and jazz. In July 2019 she released her debut album “Reencontro” with her project, Julia Bomfim Trio, a collaboration with guitarrist Eduardo Mercuri and percussionist Kan Yanabe. Show less 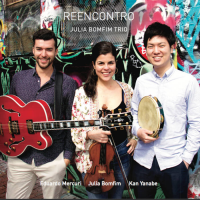 All About Jazz musician pages are maintained by musicians, publicists and trusted members like you. Interested? Tell us why you would like to improve the Julia Bomfim musician page.