A native of Los Angeles, jazz vocalist Julie Newsome has taken the time to nurture her voice into an expressive instrument, weighted with the emotions of a lifetime. Emerging now as a spotlighted artist, her debut CD, Julie Newsome, is selling to avid fans all over the world. Nothing gets lost at her live performances. Her voice, distinctive, her articulation, supreme; her irrepressible energy & spirit shines through on every note, packing each venue she plays.

Ms. Newsome lives in Southern California with her husband and very feisty terrier.

Julie Newsome Vocalist
Among the best and above the rest, May 25, 2007 I have many decades of listening to various artist and groups. Many have produced music that I like to listen to over and over again.

I found, very few that I have liked all of, or the majority of their work. Julie Newsome will be up there with these few such as, Patsy Cline, Marty Robbins and a few others that who have produced works of such caliber. I'm looking forward to more of her work. 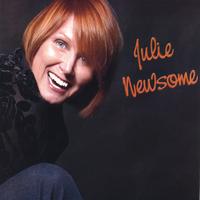 All About Jazz musician pages are maintained by musicians, publicists and trusted members like you. Interested? Tell us why you would like to improve the Julie Newsome musician page.