From the early age of four June Garber dreamed of a life on the stage, but her parents had conflicting ideas. Born in Johannesburg, South Africa, it wasn’t until she came to Canada in 1975 that she was able to pursue her career as a singer and an actor. As an actor, June performed in theatres across Canada, and her stagecraft is still evident in her singing performances today.

Watching June sing, you feel as if she is singing directly to you. Her sheer joy at being on stage envelopes you, pulls you close and encircles you with her warmth! Every song that she chooses to sing connects to a base truth within – so there is never any artifice. Her voice reflects each emotional shift that the writer intended.

June has toured and performed as a singer in major centres in Canada and the United States and also in Cuba, the Caribbean, Mexico, South Africa & Australia. She has performed at jazz festivals throughout North America and with big bands in Toronto and Sarasota, Florida.

June’s new album “This I Know” weaves a tapestry of her life’s experiences so far. Tracks reflect a range of emotions – love, joy, pain, sadness – presented in some wonderful jazz songs that are not often recorded. “This I Know” also includes tracks that pay musical homage to her South African roots, reflecting both its beauty and its troubled past. June’s previous albums “Smile” and “Here’s to You” were both very successful and received extensive airplay in Canada and around the world. 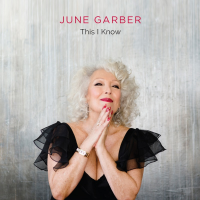 June Garber
This I Know

All About Jazz musician pages are maintained by musicians, publicists and trusted members like you. Interested? Tell us why you would like to improve the June Garber musician page.