Kadri Voorand, awarded the President’s Young Cultural Figure Award in 2019, is Estonian vocalist, pianist and composer whose main concentration these days is on her duo with Mihkel Mälgand, Kadri Voorand Quartet and the vocal ensemble Estonian Voices. She creates music through strong emotional storytelling, combining catchy rhythms with a completely unique way of blending improvisational pop, jazz and folk elements. Though, her creative output keeps moving from one extreme to another. For example, she has recently soloed in front of the Estonian National Symphony Orchestra with Ülo Krigul’s premiere falling into the genre of contemporary classical music, composed music for the animated film Orpheus by Priit Tender, and collaborated with various artists, such as Anthony Branker, NOËP, Rein Rannap, Erki Pärnoja, and others. Moreover, she has written a large-scale composition Giving Myself to the Sea for the Estonian Philharmonic Chamber Choir, which was also released as a book. As a composer and performer, she has also contributed to the Estonian Song and Dance Celebration. At its jubilee, her song Ära mind lahti lase earned an encore.

Voorand has produced seven albums, four of which have been recognized at the Estonian Music Awards and her latest album has been released by legendary label ACT Music.

In addition to the President’s Young Cultural Figure Award 2019 she was awarded as the Musician of the Year 2020 by Estonian Public Broadcasting. She has received four Awards for the Best Jazz Albums of the Year and in 2017 she was awarded as the Female Artist of the Year by Estonian Music Awards. Same year the Estonian Choral Association awarded her as the Choral Composer of the Year. In 2015 she received the Best Jazz Musician of the Year award and was recognized by the prominent Estonian Music Council as a radiant and powerful jazz musician in 2014. In 2008 she carried off the trophy for Young Jazz Talent.

Kadri has been singing, dancing and playing the violin since her early childhood. Thus she could improvise, create melodies and keep the rhythm at a young age in her mother’s folk band. At the age of five, she started to learn classical piano, and created her first pieces by the age of six. Voorand’s first significant steps towards jazz were her arrangements for the vocal ensemble Sheikid founded in her teens, which also won several prizes. Soon after she had started to study at an academic level, her talent caught attention, leading to collaboration with several Estonian and foreign top artists. Voorand has graduated from the Estonian Academy of Music and Theatre and is working there as one of its youngest lecturers. She has also improved her skills at the Royal Swedish Music Academy. Show less 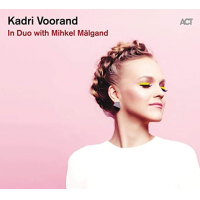 In Duo With Mihkel...

All About Jazz musician pages are maintained by musicians, publicists and trusted members like you. Interested? Tell us why you would like to improve the Kadri Voorand musician page.