Karen's live performances are “electrifying and explosive!” She was born in New York City and raised in Portsmouth, VA where she learned to play violin in a classroom setting at the age of 12.

Her playing is strong and indicative of her exposure to Jazz, Gospel, Latin, Classical, African and mid-eastern music styles. All are combined with a unique melismatic, 'vocal-like' soul, thus giving her a rare and distinguishable signature of sound.

She has been sought after to record or appear in a wide variety of musical situations ranging from Gospel (Kirk Franklin, Donnie McClurkin & Yolanda Adams) to Symphony (The Virginia Symphony) to jazz (”Vertu” Stanley Clarke & Lenny White, Mike Phillips) to Hip Hop (Wu Tang Clan, Hidden Beach: Unwrapped Volumes I - IV). Another noteworthy fact is that Karen is the first violinist to win Amateur Night at the Apollo Theater!

Described as “that lady in red”, her fiery performances in the multi-platinum selling, “Yanni: Live at the Acropolis” PBS special has been seen and remembered by literally millions of people around the world.

In between touring, sessions and live guest appearances, Karen is has completed a long awaited solo CD release, “Soulchestral Groove” (August 2009) which features her in her own light and is available exclusively at her live performances!

Next to Take the Exodus to Jazz Stage ... Contemporary Jazz Artist Lao...

A dazzling solo by the great Karen Briggs will floor you!! ~ Paula Edelstein 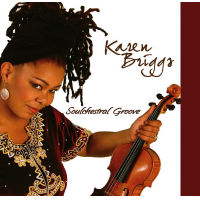 All About Jazz musician pages are maintained by musicians, publicists and trusted members like you. Interested? Tell us why you would like to improve the Karen Briggs musician page.